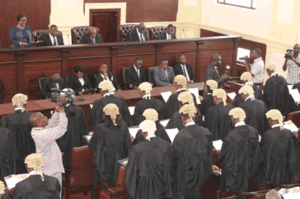 The General Legal Council (GLC) has constituted a Committee to investigate the “steady decline of performance in the BAR examinations.

This is in line with their policy to holistically collaborate with key stakeholders in addressing all issues affecting legal education in the country.

A release from the GLC and copied to the Ghana News Agency, said the Council was aware of the interest, the public had in legal education in the country.

It said in the quest of the GLC to ensure that only internationally competitive lawyers were produced from the various tertiary institutions, it introduced the competitive entrance and exit examinations, akin to best practices in other jurisdictions.

“However, the GLC has been concerned over the past few years, about the steady decline in the pass rate of the BAR Examinations, and was collaborating with key stakeholders on this issue, with the view to addressing the major causes and failures,” the release said.

It continued, “as an immediate measure, the GLC, acting through its Chairperson, her Ladyship the Chief Justice, has constituted a Committee, chaired by her Ladyship Mrs. Justice Sophia Adinyira, Justice of the Supreme Court, to investigate the causes.”

The release urged people with relevant information to assist the Committee to submit their views to the office of the Judicial Secretary.