GTA gears up for Kwahu Easter

March 8, 2019 General News Comments Off on GTA gears up for Kwahu Easter 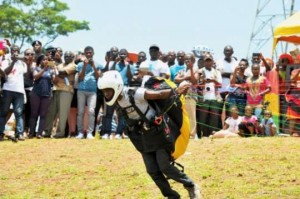 Mr. Frederick Adjei–Rudolph, the Acting Eastern Regional Manager of Ghana Tourism Authority (GTA), has said, preparations are far advanced for an exciting Easter festival on the Kwahu Ridge this year in the Eastern Region.

He said, due to the increasing interest shown in the paragliding festival, an expansion of the take off point on the Odweanoma Mountain has been completed; hence four pilots could take off at the same time.

Speaking in an interview with the GNA, Mr Adjei-Rudolph said, as part of the preparations, the road from Etibie to the take off point has been constructed to ease driving to the place.

He said, as part of efforts to improve the environment to accommodate large number of tourists, a pavement has been fixed to reduce the dust that has been a major worry for years for tourists.

Mr Adjei- Rudolph said, Ghanaian solo pilot are being trained for future assignments adding that, “for now only the tandem pilots are those who would be carrying passengers to fly with them”.

He said a flight for one person is GH₵ 350.00 and a ticket for two would cost GH₵ 600.00, adding that, meetings were being held to add other activities to the paragliding festival.