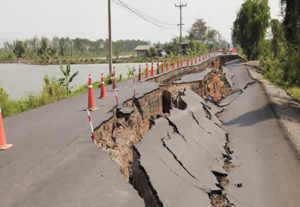 People living along earthquake prone areas within the country, have been urged to evacuate these areas.

“The National Disaster Management Organisation (NADMO) has not taken the decision to forcefully evacuate at the moment. We are at the moment appealing to owners of buildings and structures within high-risk zones to relocate for their own safety.”

Mr. George Ayisi, communications director of NADMO, told the Ghana News Agency (GNA) in an interview, that NADMO had begun and would intensify educating people living within and along earthquake prone areas, known as fault lines or zones, on the dangers they faced.

He said it was crucial to understand that with a number of minor earthquakes occurring in close succession to each other, a major one that could cause real damage was certain.

Mr. Ayisi said considering the fact that there was no means of telling when this major earthquake would happen, it was best to evacuate areas known as the fault zones or lines, that would most bear the brunt of the quake, once it happens.

The communications director of NADMO meanwhile, advised people to move to open areas where there were no structures to fall on them whenever they felt any tremors.

Mr. Ayisi said it was important to avoid situations where falling objects and collapsing structures could cause injury or loss of life during such occurrences.

He mentioned places that bordered on fault zones as areas along the coast of Gomoa Nyanyanor in the Central Region to the barrier through to Tetegu, Macarthy Hill, the Weija dam to Gbawe through to the Akuapem ridge.

An earthquake measuring 3.9 on the richter scale was recorded at about 2328 hours on Saturday, March 2nd, 2019 by the Ghana Geological Survey Authority, and was estimated to have centered around Gbawe, Weija and Bortianor in the Ga West and Ga South municipalities.

The quake is the third to have occurred around the same region this year.

On January 13th and 25th of this year, 2019, two minor earthquakes measuring 2.6 and 2.5 on the richter scale, occurred respectively, within the same location.

Mr. Nicolas Opoku, Senior Seismologist at the Ghana Geological Survey Authority, said in an interview with the GNA, that structures within and along earthquake prone zones or fault lines, could typically not survive a major earthquake.

He said whenever small and minor earthquakes happened in close succession to each other as was currently happening in the country, it meant a major one that easily threatened life and property was imminent.

“The nature of earthquakes however makes it impossible to predict them currently, so one effective means of mitigating the effects of such major earthquakes is to evacuate once the warning signs begin to show.

A major earthquake that hit Accra in 1939, killed over ten people and injured several dozens.

The 1939 earthquake, also caused severe damage to a large number of houses and structures.