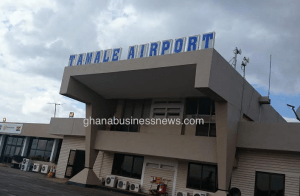 The financing will support UK firms to develop the projects. A press release issued by the UKEF says support will be provided to projects that have a direct impact on the country’s infrastructure and economic development, while delivering opportunities for British companies.

According to the release, £70.3 million of the support will go towards a contract for Contracta Construction UK to develop and modernise the Kumasi Central Market.

UKEF will provide a direct loan and bank guarantee to Ghana’s Ministry of Finance to fund the contract, which will include improvements to electrical networks, water supplies, generators, fire detection systems and public transport, it said.

It indicated further that a guarantee for a £43.8 million loan will also be provided by UKEF to the Ministry of Finance to support the contract with QG Construction UK for the modernisation of the Tamale Airport. The project will include the construction of a modern new international terminal building, access roads and ancillary facilities exclusive for civil aviation in the existing airport space.

“The expansion is designed to promote economic growth, to increase tourism and to boost socio-economic development by improving connections to the north of Ghana. It will also benefit Hajj pilgrims with the new Multipurpose Facility serving as a terminal building during the Hajj Season,” the release said.

It added that the Bekwai hospital will be provided with a guarantee for a £17.6 million loan from UKEF to support a contract between Ellipse UK and the Eurofinsa group. The companies will manage every aspect of the hospital’s completion including the supply and installation of medical equipment. Once completed, the hospital will have 120 beds, an emergency department, a maternity ward and an operating theatre.