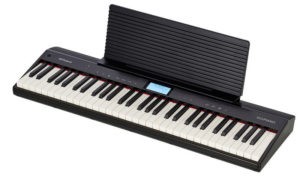 Dr Matthew Opoku Prempeh, Minister of Education on Wednesday Presented 220 units of Digital Piano to the Ghana Education Service to be distributed to 70 selected Senior High Schools in the country.

Dr Prempeh said the musical instruments were donated by the Republic of South Korea through the Booyoung Company limited to the Ministry to enhance teaching and learning in the country’s educational sector.

The Minister said the Republic of South Korea through Booyoung Company limited pledged to donate 2,000 units of Digital Pianos and that the rest of the items would be presented to the Ministry later.

Dr Prempeh said the gesture form part of the Ministry’s strategic agenda to inculcate the study of creative arts into the country’s educational curriculum.

He thanked the company for the gesture and urged other corporate bodies to emulate them to enhance the learning and teaching of creative arts in schools.

Mr Anthony Boateng, the Deputy Director General, Ghana Education Service who received the items promised the Ministry he would distribute the items to the schools for its intended purposes.

In a related development, the award winners for last year’s UCMAS competition that took place in Koala lampo, Malaysia paid a courtesy call on the Minister to introduce their awards to him.

Mr Roger Ohene, the Chief Executive Officer, UCMAS Competition, said 39 school children from Ghana participated in the competition and 38 of them won an award and decided to introduce the children to the Minister for the achievement they chalked.

Mr Ohene said the international competition had over 48 countries participating with over 3,000 children participating.

Some of the schools that participated for the competition are Ancilla International school, Alpha Beta School, and McCarthy Hill school.

Ms Tamakloe in an interview with the Ghana News Agency said her achievement was through hard work adding that her award would motivate her colleagues to work hard.

She thanked her coach, her parents and friends who help her to achieve the award.

The UCMAS competition is a brain developing programme for children between the ages of 4-14.