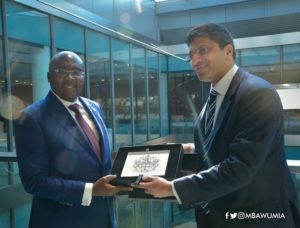 The London Stock Exchange (LSE) has agreed to partner Ghana in a bid to aid the development and robustness of her capital markets infrastructure.

The agreement was reached when Ghana’s delegation, led by Vice President Dr. Mahamudu Bawumia, held a joint meeting with the leadership of the LSE, at the sidelines of the Ghana-United-Kingdom Business Council meeting, in London, on Monday.

Mr. Nikhil Rathi, the Chief Executive Officer and Director of International Development of LSE, led his team to sign the agreement.

He reiterated the Government’s resolve of moving the development agenda ‘Beyond Aid’, hence its determination to implement economic policies capable of attaining that agenda.

It was also building a robust financial system to support local businesses and international investors and, thus, considered the cooperation with the LSE as a step in the right direction.

Mr. Rathi, for his part, pledged the support of the LSE through its emerging markets office and the African Advisory Group, which was set up purposely to help Ghana, and other countries, to realise their ultimate dream of building a robust financial system capable of participating in global capital markets.

A working group, which would be led by the Ministry of Finance and the Emerging Markets Division of LSE, would see to the effective realisation of the objectives of the cooperation agreement.

The recent financial sector reforms and the performance of the country’s macro indicators continue to impress the international financial community, leading to significant interest and investment flows.

With such significant strides, Ghana is poised to become the leading financial services hub in Africa.

This, however, requires substantial improvements in the existing financial services infrastructure.