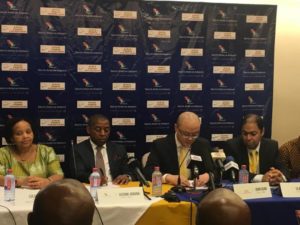 The agreement was signed between the two airlines at the Ministry of Aviation in Accra.

Speaking at a press briefing following the signing ceremony, Mr John Xiaoyi Quran, Chief Executive Officer of AWA said the signing of the agreement was a milestone for the airline in the bid to deepen its partnership with SAA.

The agreement, he said, would allow AWA to transport its passengers across South African Airline’s network in South Africa and North America while also giving SAA access to the market in West Africa through AWA.

“The partnership is an important one for both sides,” he said.

He stated that AWA had invested heavily in safety, becoming the first and only domestic airline in Ghana to obtain the IATA Operational Safety Audit (IOSA) certification, which was a standard for all major international airlines.

He said both airlines could do much more with the agreement signed such as coordinating effective use of their resources, such as human resource.

“I am very confident that through this cooperation, Africa World Airlines and South African Airways will both benefit, “he said.

Mr Vuyani Jarana, Chief Executive Officer of SAA, said the partnership with AWA opened the door for SAA to expand its network to a larger market in West Africa, which was an important market for the airline.

SAA on the other hand, would bring the capabilities of a strong brand as well as its trunk network to feed AWA’s network in West Africa.

He said there were many areas of cooperation that would be explore under the agreement such as training, safety management, among others. The immediate focus would however be on commercial execution and managing costs between the two airlines.

“If we are able to pool our buying power together; whether we’re buying fuel or negotiating airport charges, these are the things we have to collaborate on” he said.

He added that the airlines would have to find a different model of running the airlines, given the particular challenges facing airlines on the continent, especially around cost.

He said SAA was quite pleased with the collaboration, as it had a long legacy of technical capabilities and would like to bring that into the relationship with AWA.

“We have teams that are committed to do the work and we want to focus on execution… we will see rapid execution of projects” he said, which will be tracked monthly to ensure results.

Ms Lulu Xingwana, South African High Commissioner to Ghana, said the agreement, aside the commercial benefits for the two airlines, will also boost trade and tourism in Ghana, South Africa and other cities to be covered.

She explained that the agreement, in facilitating seamless travel across West Africa, South Africa and other regions in the airlines’ network, would boost trade.

According to her, trade between Ghana and the US; and Ghana and South Africa, had increased tremendously following the launch of SAA’s Accra-Washington flights in 2015.

She noted that this was a very important benefit, which was in line with the African Union’s efforts to boost intra-African trade, which currently stood between ten and 12 per cent.