WANEP calls for urgent attention on deteriorating crisis in Cameroon

February 25, 2019 Africa/International Comments Off on WANEP calls for urgent attention on deteriorating crisis in Cameroon 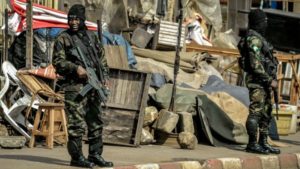 The West Africa Network for Peacebuilding (WANEP) has called for urgent attention on the deteriorating crisis in Cameroon and its implication for stability in West Africa.

A statement issued by WANEP and copied to the Ghana News Agency said the organisation wished to express its concern and to draw global attention to the deteriorating situation in Cameroon.

It said the current violent agitations going on in the country by the English-Speaking North West and South West regions had historical origins and regional and international significance.

It said by virtue of its shared history and geographical proximity, Nigeria had the greatest burden, and perhaps more in the quest for a durable solution to the crisis.

It noted that the influx of more than 40,000 registered refugees, with tens of thousands more living in host communities, constitute a huge humanitarian burden to a country that is already grappling with its own internal displacement as a result of the Boko Haram and herders-farmers crisis.

Since 2017, hundreds of thousands of Nigerians living in Cameroon following the 1967-70 war, and who dominate the trade and commerce landscape, were returning to Nigeria in their numbers.

About 500,000 had been internally displaced in Cameroon, the statement said.

According to Cameroon’s private sector affiliate, Groupement inter-patronal du Cameroun (GICAM), in its September 2018 Report, the economic and financial cost of the crisis had been enormous: over $566 million lost in business deals; with $4,062 infrastructure losses, 6,434 formal sector jobs and 8000 jobs lost in the informal sector.

“With close to half a million internal displacements, the total losses in the affected villages and remote towns are yet to be ascertained,” it said.

“Though there is no official number of casualties, reports of a dirty war that is indiscriminately targeting civilians is alarming.”

The statement said evident by horrific pictures and videos, the Military, as well as the separatist fighters known as the “Amba Boys”, were committing atrocities that amounted to war crimes and crimes against humanity.

Summary executions, indoctrinate arrests, kidnap for ransom, burning of schools and hospitals, and the burning of houses in a typical scorched-earth policy were taking place on a regular basis.

School enrolment had dropped drastically in a region that used to take pride in its exceptional educational records, the statement said.

It said the allegations that genocide might be unfolding while the global community watched were worrisome.

Several calls for dialogue in resolving the crisis have not yielded any result.

“Conscious that Cameroon is still embroiled in the fight against Boko Haram in its Far North Region, and a threatening incursion in its eastern border by Central African Republic militant/rebel groups and is currently facing a post-election challenge by the main opposition group, WANEP wishes to reiterate that hardcore security and military approach cannot resolve this crisis,” the statement said.

It said in line with the African Union’s resolve to ‘Silence the Guns in Africa by the Year 2000 and in accordance with the ECOWAS Conflict Prevention Framework, WANEP strongly condemned all the atrocities going on in the English-Speaking part of Cameroon and calls on perpetrators to abide by international laws and conventions.

It expressed shock at the level of violence going on and the silence of the international community and international media as well as the rather nonchalant attitude of other non-state actors in Cameroon.

The statement called for immediate cessation of hostilities and commencement of a facilitated dialogue by willing partners in the spirit of solidarity and humanity.

It called for an independent investigation into the atrocities and crimes against humanity and for perpetrators to be held to account.

“WANEP wishes to recall that Cameroon was a founding member of the WANEP Board in 1998 and, therefore, expresses her readiness to assist in whatever way feasible, to work towards a peaceful settlement of the crisis in Cameroon.”