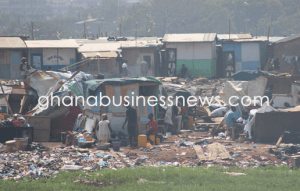 There is the need to respect and appreciate the fact that people who dwell in slum settlements are fellow citizens and humans, with the same rights as every other person.

“If we continue perceiving and describing people living in slum areas as squatters who need to be evicted, we would in effect not be achieving actual progress, so far as bringing out the best in everyone, towards the over-all socio-economic progress of the country is concerned.”

Dr Ronald Odamptey, a professional Planner, and a Vice President, Policy Planning Division of the Ghana Institute of Planners, said this when he presented a report on  research he conducted on understanding slums and informal settlements.

Dubbed “Slums and Informal Settlement Development towards making Ghana’s cities resilient,” the research, an initiative of Good Governance Africa, seeks to achieve deep understanding for slum developments in the country, especially the city.

It also seeks to build a workable consensus with all stake-holders, towards effecting personal and socio-economic growth, through properly addressing the issue of slums and all other forms of informal settlements in the country.

He said while people living under more decent circumstances generally looked down on parts of the country typically described as slums as well as the people in those places, slum dwellers entailed a wide variety of people.

“There are teachers, lecturers, and people with a wide range of skills in these slums, which can be harnessed towards the progress of the nation, as well as the well-being of these very people,” he said.

Dr. Odamptey said the time had come for the nation, especially stakeholders such as the government and other policy makers, to respectfully engage people, living within areas identified as slums, with the aim of involving them in the over-all national agenda.

He said involving these “slum dwellers” in evolving policy that basically involved them, would be a much more effective means of containing the situation and improving the situation.

Nana Osei Bonsu, West Africa Board Chairman, GGA, said the development and improvement of slums, was crucial to the attainment of the SDGs and particular note had to be taken of the fact that “no one is supposed to be left behind with regards to attaining the SDGs”.

Nana Osei Bonsu said the lives and wellbeing of people living in slums, was equally important as others and called for support and collaboration from all stakeholders including; the media, towards ensuring that slum developments, especially the people staying in them, were treated with great consideration and respect.

“Let us all strive to improve the livelihood of our fellow humans, who find themselves caught in these circumstances,” said Nana Osei Bonsu.

Mr Mohammed Alhassan, Director of Policy, Planning, Budget Monitoring and Evaluation, Ministry of Inner-Cities and Zongo Development, launched the report on behalf of the sector minister, Mustapha Abdul-Hamid and said, the ministry was committed to improving the lot of people living in places labelled as slum areas.

He said the doors of the ministry were ever opened to all stakeholders and concerned individuals or groups, so far as collaboration towards improving on the lives of slum dwellers was concerned.

The GGA is a non-political research and advocacy based centre, dedicated to promoting good governance in Africa.