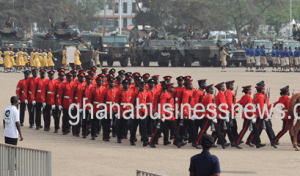 He said the Government would also expand the housing project from six 16 flats to 44, and begin constructing 160 two-bedroom apartments for the military across the country.

“This year, we will also complete and commission the 500-bed Military Hospital in the Ashanti Region, and begin the third phase of this project,” President Akufo-Addo stated on Thursday in his 2019 State of the Nation Address to Parliament.

He said the security services were at the forefront of keeping Ghanaians and the nation safe.

He paid homage to the men and women of the services for the sterling work that they do.

He said the Ghana Armed Forces, in collaboration with other security agencies, have been in Operations Calm Life, Cowleg, Halt, Conquered, Fist, Gongon, Citadel, Ahodwo and Vanguard.

“Ayekoo to you men and women of the Armed Forces. Ghana is proud of you. Your hard work is contributing to making our nation a safe place,” the President remarked.

He also mentioned the improvements that had been registered in dealing with nomadic herdsmen.

He said the Ghana Armed Forces assisted the National Security to embark on Operation Roadstar, and as a result a 40-cre cattle ranch had been constructed to accommodate over 6,000 cattle at Wawase, in Afram Plains, and reducing, considerably, the tensions in the area with the nomadic herdsmen; adding that there were plans to replicate these ranches in other parts of the country.

President Akufo-Addo said the Government was pleased to have fulfilled its promise to the Military Personnel by increasing the United Nations Peacekeeping Troops contribution allowances from $30.00 to $35.00 per soldier per day.

He said: “And as promised, we will continue to pay the troops regularly at the operational areas. We will continue to modernize and provide the equipment needed by the Military to help them carry out their mandate effectively.”

He announced that he would be presenting to the Ghana Armed Forces 50 ANKAI Buses, the first tranche of the 138 Staff and Operational Vehicles of various categories, and 26 dispatch motorcycles.

He noted that this year, the Government would provide the Army with 30 Otokar Armored Personnel Carriers (APC), and six Fast Patrol Boats for the Navy.

He said the amendment of LI 1332, which was seeking to change the length of service of the men and women of the other ranks of the Ghana Armed Forces from 25 to 30 years and the associated career progression plan, had been reviewed, laid and passed by Parliament, and would be implemented this year as planned.

With regards to the police, President Akufo-Addo said: “It is the police that we the ordinary citizens have to deal with in our everyday lives. It is, therefore, not surprising that, often, the police come in for a lot of criticism from the people.”

He said as was the case with many of state institutions, things had deteriorated for a long time, and Ghanaians had come to accept the abnormal as normal.

“We have been busy this past year supplying the police with equipment, cars, motorbikes, drones and other vital policing equipment. Financial clearance has been given, and they are in the process of recruiting up to 4,000 men and women into the service,” he said.

“That is a first, gradually we are increasing the police numbers, and the service too is waking up to its responsibilities and offering more training to their officers.”

He said, he looks forward to a better trained, better equipped and happier police service that had the respect and cooperation of the people.

President Akufo-Addo said Ghanaians need these well-trained police service if they were to abide by the rule of law.