February 16, 2019 Tourism Comments Off on Authority sets up taskforce to look into extortion allegations at Ghana international airport 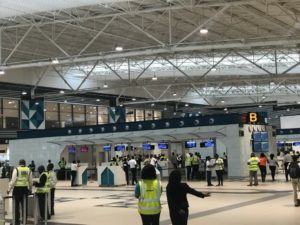 The Ghana Civil Aviation Authority (GCAA) has set up a Taskforce to look into allegations of coercion and extortion by uniformed personnel working at the Kotoka International Airport, the Director General of the Authority has said.

A statement issued by the GCAA on Thursday, signed by Mr Simon Allotey, Director-General, and copied to the GNA, said such practices were ‘highly unprofessional, unethical and unacceptable.’

“The Authority has set up a task force to investigate the matter and in the same vein, has requested the Ghana Airports Company (GACL) Ltd to put measures in place to curb such practices,” the statement said.

It advised the general public not to give in to pleas, coercion or extortion of money by any personnel operating at the Kotoka International Airport and urged them to report such conduct to the Consumer complaints unit within the Ghana Civil Aviation Authority at consumer@gcaa.com.gh or +233 (0) 302 773927 / 0261700687.

“The Authority will continue to ensure that passengers are not harassed and will sanction any person or group of persons found engaging in acts at our Airports that tarnish the image of our country,” it said.

The statement follows some online publications which alleged that some staff manning the airport were engaged in begging and pilfering.

Facebook Twitter WhatsApp LinkedIn
2019-02-16
emmakd
Previous Ghana’s oil production to go up to 500,000 barrels – Minister
Next Akufo-Addo to present State of the Nation address next week