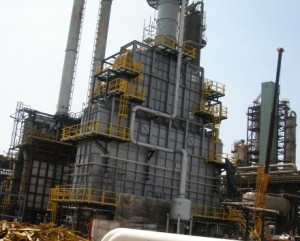 Mr Isaac Osei, the Managing Director (MD) of Tema Oil Refinery (TOR), has given the assurance that the national oil refinery would be in full operation by the end of September, this year.

He said the refinery now had the capacity to process 45,000 barrels of crude oil per extreme day and called for private sector participation to inject additional capital into its operations to shore up processing to 100,000 barrels per extreme day.

He said the refinery was currently processing 25,000 barrels of crude oil per extreme day, below its capacity, because one of the refinery’s furnace had been out of operation for the past two years.

He, however, assured the public that the dysfunctional furnace would be replaced by June this year, in order to boost the refinery’s operations.

Mr Osei made this known when the Energy Ministry took its turn at the Meet-the-Press series in Accra recently.

The media encounter afforded the Energy Minister and heads of agencies under the Ministry to render account of their stewardship to the public and engage in positive dialogue towards enhancing quality service delivery.

The Managing Director of TOR noted that when the current Management took over in early January 2017, it realised that, the oil refinery had not undergone maintenance and servicing since 2009.

That, he said, implied that the plant had missed three cycles of maintenance, which was not good for efficient service delivery.

In view of that, Mr Osei said the Management of TOR decided to undertake renovation of the plant to ensure it operated at its maximum capacity.

Responding to the recent shutdown of the Catalytic Cracker, he explained that, it was due to development of hotspots in a particular area, and that, it would take four days to repair the damage and an extra one week for test run before it could resume operations.

Meanwhile, Dr Mohammed Amin Adam, a Deputy Minister of Energy, in charge of Petroleum, hinted that the State would prosecute some persons whose actions and inactions resulted in serious financial malfeasance at the Bulk Oil Storage and Transportation Company (BOST).

He said after the  fuel contamination scandal that hit BOST, two committees were set up, with one committee mandated to look into the contaminated fuel saga while the other was to scrutinize the financial status of the company and provide appropriate recommendations to government.

He said the findings by the Committee set up by the President contained serious financial infractions, which was perpetrated by some officials of BOST and recommended prosecution of the culprits.

In one instance, it was alleged that the Managing Director (MD) of BOST transferred more than GH¢40 million into an account named as “Chief of Staff’s Sundry Account”, which the BOST MD regularly lodged money into and reportedly cashed by the Office of Chief of Staff under the previous administration.