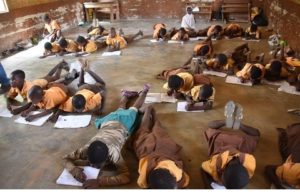 Pupils of Bukunor Junction Basic School in the Yilo Krobo District lie on the floor to write examinations.

The primary block of the school, which houses 113 pupils, has the whole roofing leaking, which means that classes have to end whenever it rains.

When the Ghana News Agency visited the school, pupils in class four were writing a test and some were sitting on the floor because of inadequate dual desks for the children.

During lessons in some of the classrooms, three to four pupils sit on a desk meant for two.

At the kindergarten, the 80 children have only nine dual desks.

Half of the roofing of the Junior High classroom for 33 pupils has been ripped off, thereby exposing some of them to the vagaries of the weather.

Mr John Kofie, the Assistant Headteacher of the School, said the school was built in 1987 by the World Vision International and handed over to government, but has since not seen any major rehabilitation.

He said the School authorities have informed the Ghana Education Service office in the Yilo Krobo District about the plight of the school.

Mr Kofie said the School has also appealed to the Yilo Krobo District Assembly and Plan Ghana International, a Non Governmental Organisation, to assist, but no help has come.