Dr Obengfo back in Court

February 7, 2019 General News Comments Off on Dr Obengfo back in Court 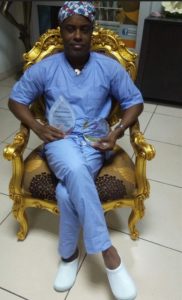 Dr Dominic Kwame Obeng-Andoh, Proprietor of Obengfo Hospital at Weija, who was recently discharged by an Accra Circuit Court, has appeared before another court again.

Dr Obeng-Andoh aka Obengfo made fresh appearance on Tuesday at another Circuit Court on the charges of practicing medicine without lawful authority and operating without license.

Obengfo pleaded not guilty and the court presided over by Mr Emmanuel Essandoh admitted him to bail in the sum of GH₵ 100,000 with one surety to reappear on February 20.

In January this year, an Accra Circuit Court presided over by Mrs Priscilla Dapaah Mireku discharged Obengfo for “want of prosecution.”

The Police, however, re-filed the case and served Obengfo with criminal summons to appear in court.

Prosecuting, Deputy Superintendent of Police (DSP) Mawuenyo Nanegbe said that the complainant is Dr Eli Kwesi Atukpui, a Medical Doctor and the Registrar of the Ghana Medical and Dental Council, Accra.

DSP Nanegbe said the accused person is a medical practitioner and during the month of July 2015, the Medical and Dental Council in a routine monitoring exercise received information that Obengfo had failed to renew his annual registration to practice as a doctor and to operate a private health facility since 2013 but continued to practice in his Obengfo Hospital.

The Prosecution said the Medical and Dental Council reported the matter to the Police for investigations and on December 28, 2016, the Police went to facility to arrest the accused for questioning but met him in the process of performing certain medical procedure on a witness in the case.

The prosecution said further investigations disclosed that Obengfo had also failed to license his health facility from which he was operating as required by the law.

He said Obengfo was then charged with the offences to appear in Court on February 6, 2017 but he petitioned the Director-General of the Criminal Investigations Department (CID) on February 7, 2017 requesting for a review of the investigations carried out by the CID.

The Prosecution said consequently the criminal proceedings were halted temporarily and the case docket forwarded to the Attorney General’s Department for advice.

He said in a letter dated May 2018, the Attorney General’s office advised that all the charges preferred against Obengfo should be maintained and he was also to be arraigned.