February 3, 2019 General News Comments Off on US Ambassador condemns ‘senseless’ murder of Hussein-Suale 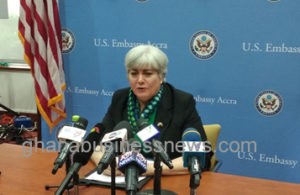 Ms Stephanie S. Sullivan, the Ambassador of the United States to Ghana, has condemned the murder of Investigative Journalist, Ahmed Hussein-Suale, describing it as “senseless”.

She said the United States condemned the act on Mr Hussein-Suale, who was a young journalist performing his duty.

Ms Sullivan said during her first interactive session with the media since assuming office as new US Ambassador to Ghana.

“This was not only an attack on him personally but also on Ghana’s climate of transparency, democratic credibility and press freedom,” she stated.

Ms Sullivan said the United States was and would remain committed to promoting a free, vibrant and responsible media.

She said the Embassy would work with both the Government of Ghana and representatives of the media to foster such an environment.