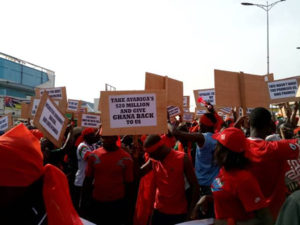 The Youth in Tarkwa Banso have staged a demonstration against Ghana Manganese Company Limited (GMCL) at Nsuta Wassa in the Tarkwa Nsueam Municipality.

The demonstrators, clad in red and black attire with red head and arm bands, chanted war songs and besieged the mining site for hours to prevent workers from carrying out their duties.

Speaking to the Ghana News Agency after the demonstration, the Chairman of the group, Mr Victor Kwarteng, said because GMCL wanted to expand its operations, management of the firm decided to resettle the Tarkwa Banso community.

He said GMCL met the affected residents and both parties made the necessary agreements and they were relocated as planned.

Mr Kwarteng explained that ever since GMCL moved them, they noticed there were no social amenities and majority of their homes, place of convenience were not functioning making the whole town inhabitable.

He further argued that authorities of GMCL were aware of their challenges but several months of promise to solve the issues have proved futile.

Mr Wisdom Adjei Mensah, the Human Resource Manager for GMCL, was at the scene to calm down the petitioners and assured the youth that plans were far advanced to solve all their predicaments.

He advised the youth of Tarkwa Banso to use the appropriate channel to get their grievances addressed.