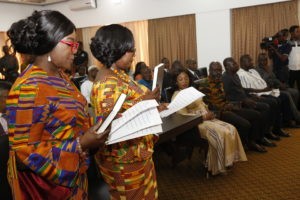 Two Ambassadors-designate accredited to Norway and Belgium were on Friday granted their Letters of Commission with a charge to safeguard and promote the image and interests of Ghana, economically and socially, at all times.

They are Mrs Harriet Sena Siaw-Boateng’s who heads to Belgium and doubles as Ghana’s Permanent Representative to the European Union, and Mrs Jennifer Lartey, Norway.

The pair swore to the Oaths of Allegiance and Secrecy administered by President Nana Addo Dankwa Akufo-Addo at a short ceremony at the Jubilee House in Accra.

President Akufo-Addo congratulated the two on their “well-deserved appointment”, saying they were carefully chosen and eminently fit for the job ahead of them.

He exhorted them to do everything possible to guard and uphold the image of Ghana, which was high in the comity of nations.

The president asked them to be mindful of the fact that they represented a country regarded as one of the most stable on the continent, a beacon of democracy, governed by the rule of law and respect for individual liberties, human rights and the principles of democratic accountability.

He re-emphasized government’s commitment to changing the economic paradigm of the country and urged the envoys to tailor their interventions, at all times, to the objective to build a Ghana Beyond Aid.

“Ghanaians have placed their hopes of a better life in us… we cannot disappoint them.”

President Akufo-Addo charged them to deepen the bonds of cooperation between Ghana and the respective countries they had been accredited to and seek out other areas of engagements that would be beneficial to the peoples of the respective nations.

He further enjoined them to strive to develop cordial relations with the professional Foreign Service officers at their duty post as their invaluable experience and knowledge would help them work effectively.

He also asked them to establish good rapport with Ghanaian nationals who would be vital to their prospects of success in their respective countries, noting, “they will be counting and looking up to you to champion not only our nation’s interests, but theirs as well”.

‘Do your best not to disappoint them,” he said.

Mrs Siaw-Boateng expressed gratitude to the President for Honour bestowed on them to serve Ghana and pledged that they will both work to attain the objectives and vision of the Government.