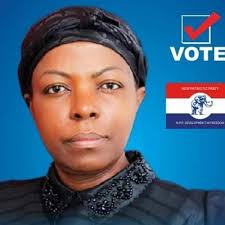 Madam Lydia Seyram Alhassan, the Member of Parliament-Elect for the Ayawaso West Wuogon, has expressed optimism that her endorsement in the just ended polls is an affirmation by Ghanaians of the good works of the Nana Akufo-Addo-led government.

She declared:” Mr President, this is a referendum and a “yes vote” for your good works and the work begins from now for the 2020 general election”.

Madam Alhassan, who is the second wife of the late MP, re-affirmed her earlier pledge to pursue “Youth in Entrepreneurship” programme to make the youth in the constituency self-employed and financially-independent.

The MP-Elect told the media at the University of Ghana Central Cafeteria after Mr Alex Oppong-Poku, the Returning Officer of the Electoral Commission, had declared her winner of the Ayawaso West Wuogon by-election.

There were 88 rejected ballots.

Madam Alhassan expressed profound appreciation to her constituents for the honour bestowed on her to represent them in Parliament, thanked the President for his unflinching support and the entire NPP family for rallying behind her through thick and thin.

Interestingly, the victory coincided with her birthday, which saw enthusiastic NPP supporters sing birthday songs for her amidst shouting of “edeho plain”, a catchphrase often spoken by her late husband, Emmanuel Kyeremanteng Agyarko during political discussions.

Mr John Boadu, the General Secretary of the NPP, said statistics from the polls showed that the party had improved on its previous performance by winning in 131 polling stations out of 137, increasing from the 106 polling stations it won in the 2016 elections.

Madam Alhassan’s victory brings to six the number of times the NPP has won the Ayawaso West Wuogon seat, as against two by the NDC.