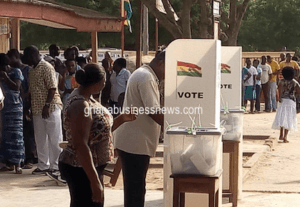 The University of Ghana Hospital, Legon, says the number of injured persons at the facility, related to the Ayawaso West Wuogon incident, have risen from seven to 18.

Giving an update on their condition on Thursday, Mr Eric Gaisey, the Administrator of the Hospital, told the Ghana News Agency in Accra, that 11 had been treated and discharged, while seven had been detained for observation.

One person who sustained a gunshot wound in the leg was in the morning referred to the 37 Military Hospital for treatment.

The incident happened at nearly 0800 hours at the residence of the NDC’s candidate, Mr Kwasi Delali Brempong, the La Bawaleshie Presbyterian Primary School One A Polling Station.

It spilled over to the Polling Station, disrupting the polls for about 45 minutes.

The NDC then announced the withdrawal of their candidate, Mr Kwasi Delali Brempong from the race; but the Electoral Commission explained that the action was technically impossible because the withdrawal of a candidate could only be acknowledged before the date of the election.

Their agents however, left the 137 polling stations.

Earlier, Mr Gaisey explained to the GNA that the six patients initially brought in had sustained injuries on their legs, the back of their heads, elbows and shoulders.

X-ray and Medical Resonance Image examinations would be conducted on them to determine the extent of injuries.

The Area Crime Officer and the University’s Police had visited the patients to conduct their investigations, he stated.

They were Ms Lydia Seyram Alhassan of the New Patriotic Party, Mr William Dowokpor of the Progressive People’s Party and Mr Clement Boadi of the Liberal Party of Ghana.

Madam Lydia Seyram Alhassan has however, replaced her husband as the Member of Parliament for the Ayawaso West Wuogon Constituency after winning the by-election held on Thursday in Accra

The NPP has won the seat since Ghana’s Fourth Republic was inaugurated, except for 1992, when it did not contest.
GNA