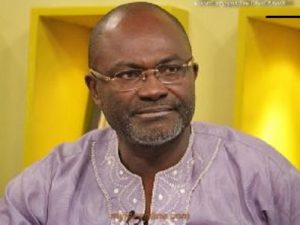 Mr Kennedy Ohene Agyapong, Member of Parliament (MP) for Assin Central has been hauled before the Privileges Committee of Parliament for allegedly inciting the public against the murdered journalists, Mr Ahmed Hussein-Suale.

This is the second time Mr Agyapong has been hauled to the committee in recent times over comments deemed contemptuous to the reputation of Parliament.

The Speaker of Parliament, Professor Aaron Michael Oquaye, referred Mr Agyapong to the Committee following a submission by Alhaji Mohammed-Mubarak Muntaka, Minority Chief Whip and MP for Asawase, that he had an audio in which Mr Agyapong was heard inciting the public to beat up Mr Hussein-Suale.

He said MPs are held in high esteem and also enjoy some privileges provided for in the Constitution, which required of them to guard their utterances.

Alhaji Muntaka said the comments of Mr Agyapong, which were at variance with the requirements in the Code of Conduct of Parliament, were an affront to the dignity of Parliament.

He said it was necessary for the Privileges Committee of Parliament to investigate the matter and punish him if found guilty of breach of privilege of Parliament.

He requested to be allowed to play the audio of Mr Agyapong making the alleged inciting comments.

Mr Osei Kyei-Mensah-Bonsu, the Majority Leader, responding to Alhaji Muntaka’s submission said members have not heard Mr Agyapong making the comments and therefore the said audio could not be played in the chamber