Power generation and distribution in Ghana are a well-known reality – Ghanaians for many years have had to endure power rationing because at some point, there wasn’t enough power to go round. The situation effectively led to Ghanaians becoming accustomed to the word ‘dumsor’, meaning switch off and on. While the availability of power has improved in recent times, it doesn’t appear to have been thoroughly addressed – and at a point the Energy Minister, Peter Amewu told Ghanaians to ‘expect intermittent outages and not total darkness.”

To add up to the energy production of the country, a private initiative by a consortium consisting of three companies, Early Power Ltd., is building a 400MW power plant known as Bridge Power for Ghana. The plant valued at $900 million on completion will be powered by LPG, making it the first in Africa and the largest in the world.

The sod was cut for the project on April 27, 2017 and the first phase has just started. The plant is expected to produce first power by end of September 2019, Steve Jernigan, the Managing Director of Endeavor Energy said, adding that the plant will produce 140MW of power by that time. 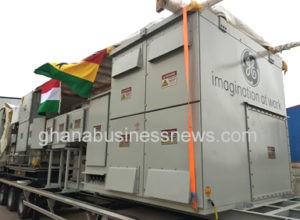 $70 million at the project site for the phase one development. Metka Engineering has begun construction work on the project.

Speaking at the ceremony, an emotional Hungarian Ambassador to Ghana, Andreas Szabo, who said the project was close to his heart, indicated that the turbines which were manufactured in Hungary are also being financed by the Hungary Export Import Bank.

The Hungarian Embassy in Ghana however shut down in 1987, reopening in April 2016 after 30 years of absence. He also noted that Hungary is aiming to be involved in as many different projects as possible in Ghana, including among others, agro-processing, IT, roads, defence and energy.

Szabo further stated that Hungary will go beyond economic cooperation and think about the people, and engage in the social development of the citizens.

Mr. Elisee Sezan, CEO, GE Power sub-Saharan Africa said the company has so far contributed to projects providing 600MW of power to Ghana and has invested $23 million in the country. According to Sezan, 10 years ago when GE started in Ghana, it had only two employees, but now the company has 120 employees. He indicated that GE is investing in STEM programmes, skills and the country’s universities among others.