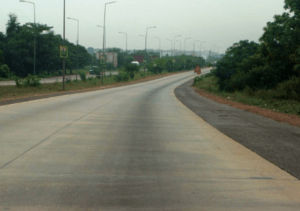 The Government has taken the necessary steps to rebuild the 54-year old 19-kilometer Tema Motorway into a six-lane road.

Built under the Administration of Dr Kwame Nkrumah, Ghana’s first President, the project would ease traffic on the road that links Accra to Tema and major towns on the Eastern Corridor and neighbouring countries including Togo.

The Motorway was initially built to transform Tema into an industrial hub of the newly independent nation and has since not seen any major renovation.

Mr Kwasi Amoako Atta, the Minister of Roads and Highways, announced this during a tour of some project sites in Accra with a team including Mr Anthony Karbo, one of his deputies, and some directors of agencies under the Ministry.

He said the Government was committed to surmounting the obstacles of massive encroachment of the reserve zone to rebuilding the road to support its industrialization agenda that would play a key role in the Ghana Beyond Aid.

The Minister cautioned property development agencies and individuals to desist from building on and close to road reserve zones, and that authorities would get tough by demolishing structures located within such exclusive zones.

Mr Amoako Atta stated that government would deal ruthlessly with institutions and individuals who flout the law adding; “Yesterday’s mistakes will be corrected today. If we do not stop such lawbreakers it will get out of hand”.

“This generation is scrambling for resources and using nature unsustainably as if there is no tomorrow. If Dr Nkrumah and our forefathers behaved this way we would have been left with nothing.”

“Under the leadership of President Nana Addo Dankwa Akufo-Addo, we will not condone with such indiscipline on our roads. We will make sure that technocrats at the various assemblies will be punished for giving out permit for such activities.”

At Mile 7 Junction, Mr Amoako Atta ordered a developer to halt a building project and asked the contractor to, within two days, produce the permit allowing him to undertake the construction.

“Even if you are a New Patriotic Party member, we will deal with you in accordance with the laws because the interest of the state supersedes that of any individual,” he added.

When the team got to the Pokuase Interchange project, the Minister commended the contractors for working ahead of schedule and playing a key role in the re-assessment process.

“I am very pleased with what I have seen because you have demonstrated that you are committed to ensuring value for money,” he stated.