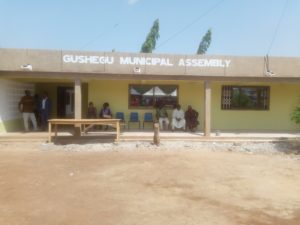 The Nabuli Primary School in the Gushegu Municipality has been converted into a refugee camp, housing displaced persons from the Konkomba-Chokosi conflict.

Mr Bright K. A Lawoe, the Gushegu Municipal Director of Education, who visited the Primary School, expressed worry about the displacement of pupils and called for urgent attention to address the situation.

The visit was part of activities of assessing the level of teaching and learning in the various schools within Gushegu.

The conflict between the two ethnic groups has led to the student population of about 300 attending classes under temporary erected sheds, which affects conducive teaching and learning.

More so, over 750 men, women and children who are displaced by the conflict are being housed in the 6-unit classroom block as shelter.

Mr Lawoe said the conflict, which could have been settled through dialogue instead of taking to arms, had led to the influx of refugees to the area and the disruption of normal school contact hours.

He said resources meant for developmental purposes, were channeled into ensuring peace.

He urged the people to use social gatherings to preach peace and co-existence since some people take advantage of such conflicts to enrich themselves.

Mr Lawoe said fighting occurs when there is no education and explained to them the importance of education in resolving conflicts of this nature.

He said there was a difference between ignorance and knowledge and that it is ignorance that brings about fighting and appealed to the people to seek knowledge.

He, however, commended the chief and people of Nabuli for providing free accommodation for teachers posted to the area and assured them of more teachers in the years to come.

Mr Lawoe advised the school children to search for knowledge by listening attentively to their teachers.

He also advised them to take their lessons seriously by learning hard and leading the crusade against the use of arms to resolve conflicts.