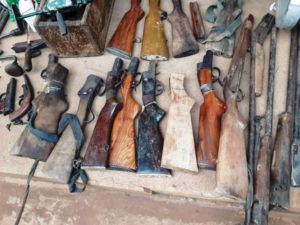 The Volta Regional Police Commander, Mr Francis Ebenezer Doku, has cautioned that the class of weapons wielded by some residents of Alavanyo in the Kpando Municipality could pose major challenges to the nation’s security.

He said some young people in the traditional area possess AK 47 rifles, SMGs, M16s among others, and underscored the need for disarmament and demobilization in the farming area also known for the manufacturing of small arms.

The Regional Commander said this when he briefed the Media on a shootout between the youth of Alavanyo-Dzogbedze and some military personnel, where two persons lost their lives on Sunday.

Earlier, the youth allegedly attacked a police team, which was said to be in the community to pick illegal arms in the possession of some individuals, and seized an AK 47 rifle belonging to one police officer.

Mr Doku told the Ghana News Agency (GNA) that the Regional Command was sending an administrative report to Police Headquarters for voluntary surrender of weapons for rewards under a moratorium.

The Commander said the Police have intelligence on the massing up of arms in the area, notably Dzogbedze, as well as the illicit cultivation of Indian hemp, and appealed to chiefs and opinion leaders to help bring the youth to order.

Mr Doku said though calm has returned to the area, the Police are on high alert to respond to any untoward situation. He added that, the Command is working to retrieve the AK 47 rifle and cuffs seized from the police on Sunday .