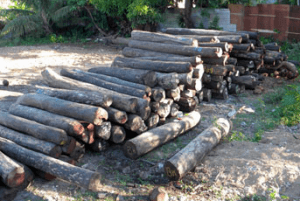 Wildfires and illegal logging and lumbering have caused extensive destruction to major forest reserves in the Brong-Ahafo Region.

The vegetative covers of the Aparapi and Bosomkese forest reserves, which covered about 522 hectares in Tano North Municipality, established in the 1930s, have turned “deserts” with the wanton destruction of more than 80 per cent of their vegetative cover.

Virtually, all the forest resources at Ayom, Abonyare and Bonsam-Bepo, which spread across the Asunafo North Municipality, Asunafo South and Asutifi North districts have also been degraded.

Though the Forestry Commission (FC) says it is collaborating with the Youth Employment Agency (YEA), under the Youth in Afforestation Module, to re-plant and restore depleted reserves continuous illegal logging and perennial bush fires threatened its re-afforestation attempt.

According to the FC, unscrupulous activities of illegal loggers remained serious national challenges in the forestry sector and, therefore, called for concerted efforts to clampdown on operators.

Mr Kwadwo Owusu Afriyie, the Chief Executive Officer of the FC, said the Commission was collaborating with security agencies and relevant institutions to intensify patrols around forest fringe communities to deal decisively with chainsaw operators.

Speaking to journalists during a two-day working visit to the Brong-Ahafo Region, Mr Afriyie said the FC’s determination to arrest the rapid deforestation through its national plantation exercise was achieving significant successes.

He expressed regret that deforestation had resulted in the drying up of many water bodies and extinction of prime timber species contributing to climate change impact of extreme heat and erratic rains.

Accompanied by some members of the Forestry Commission Board including Brigadier General Joseph Odei (Rtd), the Chairman of the Board, Mr Afriyie visited some new plantation sites in some reserves in the Region.

Describing the level of depletion at the various forest reserves as unacceptable, Mr Afriyie directed managers of the Forest Services Division (FSD) of the FC to collaborate with traditional rulers in the forest fringe communities to nurture and protect the plantation.

He said the Commission had engaged more than 200,000 beneficiaries of the YEA for the plantation exercise and commended them and their supervisors for the hard work.

Mr Afriyie said the FC was aware of the challenges confronting the re-forestation programmes and gave the assurance that those problems would be addressed as soon as possible.

He said processes towards the payment of allowances to beneficiaries of the YEA had been finalized and gave the assurance that payment would be made with arrears by the end of next month.

Mr Hugh Brown, the Director of Plantation, said the Commission cultivated more than 26 million trees in 2018 adding that this year alone over 10 million trees had been planted.

They comprise tree species such as teak, oframo, mahogany, Cinderella, Amire and gmeliner.

Dr Ebenezer Djagbletey, the Brong-Ahafo Regional Manager of the FC, said means of transport to convey the YEA beneficiaries to the various forest plantation sites remained a huge challenge and appealed to the FC to quickly intervene.

He noted that efforts to restore the forest cover in the Region was achieving desirable results and advised community leaders to help protect the forest reserves there.

At the Aparapi Forest Reserve, Mr Obeng Boamah, the Bechem District Manager of the FSD, said 44.4 hectares of depleted area were re-planted.

He said 121 hectares were re-planted at the Bia Shelter Belt Forest Reserve and commended the 470 YEA beneficiaries engaged for the plantation for their commitment to service.

Many of the YEA beneficiaries who spoke with journalists appealed to the Commission to provide them with uniforms and pay their allowances and arrears on time.