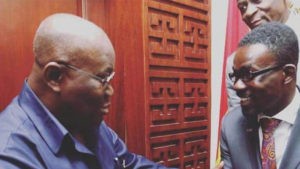 A statement issued and signed by Mr Kojo Oppong Nkrumah, the Minister of Information, in Accra on Thursday, said the President had never tweeted on his official Twitter handle expressing his admiration for the “success story” of Nana Appiah Mensah.

It said the photograph circulating on social media platforms, which saw the President and Nana Appiah Mensah in a handshake, was taken when officials of the Ghana Football Association (GFA) and Confederation of African Football (CAF) officials, including its President, Ahmad Ahmad, paid a courtesy call on President Akufo-Addo on April 25, 2018, at the Jubilee House.

The statement said the photograph was taken a day before the University of Professional Studies, Accra (UPSA) conferred an Honorary Doctorate Degree on the CAF President.

It said the then GFA President, Kwesi Nyantekyi, invited Nana Appiah Mensah to that meeting because his company, Zylofon, on April 21, 2018, had signaled its intention to sponsor the Ghana Premier League.

“The President never had a one-on-one meeting with Nana Appiah Mensah as the NDC would want Ghanaians to believe,” the statement said.

“Again, the company and its officials have never been part of any government delegation accompanying the President on any presidential visit. Speculations that the company acquired 85 per cent of its clients in the last 24 months are also an obviously cheap attempt to link government to a very unfortunate situation.”

The statement, therefore, urged aggrieved customers of Menzgold who have not yet sought legal remedy to do so to retrieve their monies from the gold dealership firm.

It said the Criminal Investigations Department of the Ghana Police Service had issued an arrest warrant in pursuant of the reports, and informed Interpol to assist in the search for and arrest of Nana Appiah Mensah and two others to help the Police in their investigations.

The statement said while Government sympathised with aggrieved customers of Menzgold for the difficult situation, the State could not and would not resort to the use of taxpayers monies to refund customers monies.

It said attempts by leading members of the opposition National Democratic Congress to blame the ruling government for the customers misfortunes was untenable because Menzgold started its operations in 2013 when the New Patriotic Party was not in power.