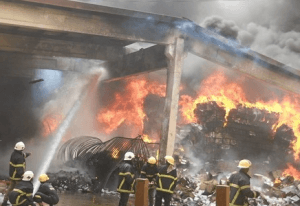 Mr. James Yaw Kwateng, the Acting Public Relations Officer, said 44 lives were lost through those fires, 11 more than the previous year’s figure of 33.

About 3,753 of last year’s fires were extinguished by the GNFS, while 1,823 cases were quenched by residents in the community or neighbourhood.

Mr Kwateng, who was speaking to the Ghana News Agency (GNA), in an interview, blamed the increasing spate of fire outbreaks in the country to the neglect of fire safety rules.

He mentioned overloading of electrical sockets, improper and careless use of liquefied petroleum gas (LPG), open electrical gadgets in homes and offices, improper handling of flammable liquids, as the main causes of fire outbreaks.

He urged the public to engage qualified electricians to wire their property and to avoid the use of fake cables.

Mr Kwateng said the GNFS had embarked on door-to-door fire safety education campaign in the various communities to assist the people to do the right things.

As part of measures to control market fires, personnel of the Service have been deployed to all the markets to educate traders on fire safety, so as to protect lives and property.

He appealed to the media to give strong support to the public education campaign on fire safety to bring down fire disasters.

He reminded everybody that fire safety was a shared responsibility and when all stakeholders’ played their effective roles, fire disasters would significantly go down.

Mr Kwateng advised farmers to work with fire volunteers in their communities to prevent bushfires.