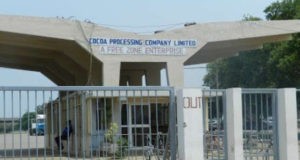 The company is also to build a five-Mega Watt Cocoa Shell based Steam Power Co-generation plant and its accessories, which will reduce the cost of electricity, diesel and Liquefied Petroleum Gas (LPG), which stands at GH¢2 million a month.

Acting Managing Director of the company, Nana Agyenim Boateng I, disclosed this at the company’s Annual General Meeting in Accra.

He said the company intends to purchase an additional Chocomaster (a moulding plant), three new wrapping machines and a drinking chocolate plant, as well as rehabilitate the accessories at the Milling Section

The Acting Managing Director said, the company had earlier, through the Ministry of Trade and Industry, requested for an initial Stimulus Package of $3 million to boost the operations of the confectionery and also as a working capital, adding that, this had been approved and management was pursuing its release from the Exim Bank.

Nana Boateng said there had been a renewed interest in the demand of the company’s confectionery products from China, Morocco, Australia and Eastern Europe.

He said, in spite of all the financial challenges, management had been careful not to add to its indebtedness by pursuing prudent and cost-saving measures as well as innovative marketing strategies aimed at achieving increased sales and revenue.

‘’We have found it most necessary as we strategize for the company’s future operation, to expand our revenue earnings base and reduce our cost of operation’’, he added.

To achieve this, Nana Boateng said a number of areas had been identified and are being work on.

“This include the improvement of visibility to increase local consumption of Golden Tree confectionery products, addition of hand-crafted and customized chocolates, the addition of premium chocolates and the rebranding of the ‘All Time Instant Drinking Chocolate’, and a ready to drink cocoa beverage.’ Nana Boateng concluded.