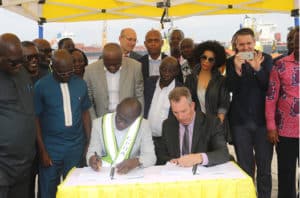 The Ghana government in a test case to build local capacity in port development in the country is working with indigenous company Ibistek Limited in a $370 million multi-purpose Atlantic Terminal project at the Takoradi Port.

Speaking at a ceremony at the Takoradi Port on Wednesday December 19, 2018, during the signing of the Engineering, Procurement and Construction (EPC) contract between Ibistek and a maritime infrastructure development group, Jan de Nul of Belgium to begin the development process of the Atlantic Container and Multi-Purpose Terminal on January 2, 2019, Mr Kwaku Ofori-Asiamah, the Minister of Transport, said port development in Ghana has been heavily concentrated in foreign hands, leaving out the development of the capacity of indigenous Ghanaian companies to execute projects within the sector.

The Minister further indicated that the increasing growth in the country’s logistics sector requires the development of competencies of home-grown companies to become competitors in the maritime infrastructural development and terminal operations chain.

By the signing, Jan de Nul will be required to fully provide detailed engineering designs, procure the necessary technical means and supplies to construct the first phase of the Atlantic Terminal.

Some amount of terminal pavement and related utilities systems will also be provided to get the phase one systems ready for operations within 18 months form the commencement date.

According to the Minister, financial arrangements, procurement of contractors and goods as well as operators for such large scale projects require the needed technical competencies of local firms to adequately enhance the local ownership of the projects.

“This project by Ibistek Limited is a test case for reform processes in port infrastructure investments which would also enable our local firms to fully participate in such activities by competing fairly with global entities in port development project deliverables”, Mr Ofori-Asiamah stated.

He further pointed out that the Government has put in place the appropriate legal framework and conditions to ensure the project succeeds and urged the consultants and project developers to work within time to deliver the project at the given deadline.

The project has evolved from a 25-year container and multi-purpose terminal concession agreement between Ibistek and the Ghana Ports and Harbours Authority (GPHA) and is being financed with 70 per cent equity from Ibistek, the Ghana Infrastructure Investment Fund (GIFF) and other equity investors.

The phase one of the terminal will have adequate operations systems to handle petroleum products, break-bulk and containerised cargoes and the terminal expected to be opened to vessel operation and traffic before end of June 2020.

Thereafter, further construction works could continue to realize the full potential of the Atlantic terminal, which is expected to have a bonded terminal space of over 50 hectares and 1,700-metres of dedicated berthing space.

It is anticipated to attract transit cargo of approximately 183,000 tons by 2020 with an annual growth of three per cent over the concession period.

The Chairman of Ibistek, Mr Gyan, in his remarks, indicated that container cargo forecast at the Takoradi Port is expected to reach approximately 525,000 Twenty Footer Equivalent Units (TEUs) by 2025.

The completion and operationalisation of the terminal by mid-2020 to accommodate larger vessels with higher delivery volumes will enhance further growth in cargo throughput.

Ibistek, Mr Gyan said is targeting an annual container throughput of one-million TEUs within a decade of operations of the terminal and will take advantage of Ghana’s growing cocoa export activity.

Mr Gyan stressed, considering the scale of the project where locals are empowered to own such key national assets, Ibistek has by this project demonstrated that home-grown companies can also do something for themselves by building their capacity to compete fairly within the global market.

He suggested that although the Takoradi Port has seen some significant gains of the country’s average international trade market share, the containerised cargo throughput of the port had been low compared to Tema Port, which controls a larger market share of about 75 per cent of Ghana’s sea-borne trade.

“With transit trade becoming competitive among ports within the West African sub-region, our goal is to be able to provide the needed infrastructural capacity for Ghana to leverage on that market as well”, Mr Gyan stated.

He said that with Niger increasing its cargo route via the Takoradi Port, the development of terminal would trigger positive gross domestic productivity (GDP) prospects for similar landlocked and hinterland countries.

The Chief Executive Officer of the Ghana Infrastructure Investment Fund (GIIF), Mr Solomon Asamoah, on his part, announced that the fund had already committed $90 million to the project.

Describing the project as key to the GIIF, Mr Asamoah said the facility could pass as the first of such developments within the sub-region by an indigenous company and would go on to create immense capability opportunities for the country.

“We at GIIF are happy with the status of this project because port facilities generate substantial revenue levels that go to support economic development, and we see this project as meeting our returns expectations”, Mr Asamoah stated.

The Director of Takoradi Port, Capt. Ebenezer Afadzie in his welcome address pointed out that the project would provide an enhanced marketing opportunity for the port within the sub-region.

He indicated that private sector involvement in the development of key infrastructure for trade is vital to the country’s economic outlook.

He further emphasized the need for such initiatives and incentives that will attract trade through the Takoradi Port, and the development by Ibistek would grow multipurpose cargo such as foods and agri-bulk products, steel, vehicles, project cargo, containers, among others, through the port.

“We, in Takoradi, see this project as a game changer for the country’s maritime sector which we believe will also impact positively on the lives of the people in the metropolis”, Capt. Afadzi stated.