December 21, 2018 Tourism Comments Off on Qatar Airways to begin operations in Ghana 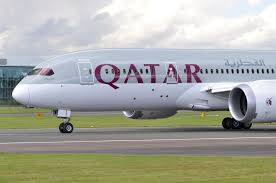 The national airline of Qatar, Qatar Airways, is expected to soon complete arrangements to fly to Ghana by next year.

“We have already gone far with talks with the Aviation Authorities in Ghana and will be flying to that country by middle of 2019”, the Group Chief Executive Officer of the Airline, Abkar Al-Baker told journalists in Doha.

He was answering questions after a press briefing on the sidelines of the 2018 Doha Forum, held at the weekend in Doha, the capital of Qatar.

The annual forum, the 18th in the series, created the platform for business executives, academia, and world leaders among other groups, to discuss policy guidelines to propel global growth and development.

“Shaping Policy in an Interconnected World”, was the theme chosen for the event, which deliberated on issues about security, peace and mediation, economic development and trends and traditions.

Akbar Al Baker said though the initial negotiations with Ghana bordered on the need for his country’s assistance to run a national airline for Ghana, Qatar planned to make Ghana one of its destinations from next year to begin with, while further discussions continued.

According to him, Qatar Airways had targeted to add 15 new destinations to its network, next year, and to also procure 36 new aircrafts for that purpose.

Akbar Al Baker was optimistic that the projections of the airline would be achieved, and said the “blockade on Qatar has failed to stop the growth of Qatar Airways”.

He added that the blockade did not have a toll on the airline because “We quickly developed new routes and though 18 routes were blocked, they were replaced with 24 destinations in Europe, Africa and Russia”.

The destinations, he said, had now increased to 30 and “We are still searching and networking to reach our target of 250 destinations as planned and also to send the message to the world that we will keep on marching forward and nothing will stop us”.

He said African countries including Ghana were underserved but had huge potential and therefore Qatar Airways was looking at Africa in a positive way by giving incentives to new entrants and other assistance to those who wanted to do business with Qatar.

“The world will see the rapid progression of Qatar Airways as we have lined up more than 15 destinations to be announced step by step, next year, while we wait for airport slots”, he said, adding that, the 36 new aircrafts would be received in the next 12 months.

Facebook Twitter WhatsApp LinkedIn
2018-12-21
myadmin
Previous Opuni trial: State objects to tendering of document through its witness
Next Only 5% of Menzgold victims would get some of their money back