Fire at ADB Headquarters caused no damage to property-GNFS

December 20, 2018 General News Comments Off on Fire at ADB Headquarters caused no damage to property-GNFS 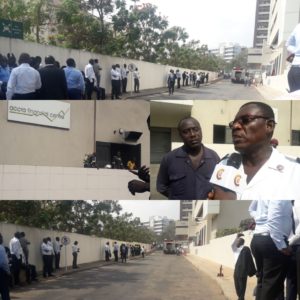 A section of the ADB Headquarters in Accra on Wednesday caught fire but the presence of fire fighters from the Ministries Fire Station brought the situation under control.

In an interview with the Ghana News Agency at the scene of the fire, Divisional Officer (DO) III Benjamin Dowona, the Second in Command at the Ministries Fire Station said: “We came and met small fires coming out from the main power unit. It was at the initial stage”.

He said the Fire Service observed that there was no ventilation for the Generator set and advised that enough ventilation must be created for the generator sets.

Mr Dowuona said the office was secured and that there was no loss of life or damage to property, and asked all customers of the Bank remain calm as the Service had managed to put everything under control within reasonable time.

He commended the staff for evacuating the building on time and advised the public to ensure the safety of their offices by putting off electrical gadgets when leaving the officers.

Some Staff of ADB told the GNA that, there was no fire alert from the alarm, the danger was communicated by the Fire Champion and that all the staff took to their heels and gathered at the Assembling Point.