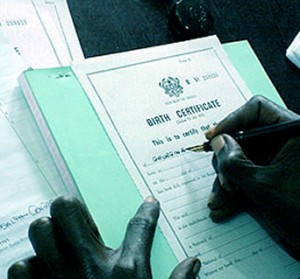 Residents of Maame Krobo in the Kwahu Afram Plains South District of the Eastern Region have appealed to government to conduct a free birth registration exercise for children beyond 12 months in the town.

The appealed was made by the residents through the Ghana News Agency on the sidelines of a free birth registration exercise for children from zero to 12 months under the auspices of the United Nations Children’s Fund (UNICEF).

The one-day exercise, which recorded over 320 births in Maame Krobo was conducted by the Births and Deaths Registry.

However, a large number of parents, whose children were over 12 months old could not register their children.

According to UNICEF, births of around one-fourth of children under the age of five-years worldwide, have never been recorded.

This lack of formal recognition by a State usually means that a child is unable to obtain a birth certificate; as a result, he or she may be denied health care or education.

Madam Ama Mansa, who could not register her son, because he was 14 months old, pleaded with the Government and UNICEF to collaborate for a similar exercise to be conducted for children beyond 12 months to enable parents like her to register the birth of their children.

She said birth registration was important because it would give legal identity to children like her son.

Madam Vida Kara, who could not also register her two daughters because they were more than one-year old, also urged the Government to create a small window of opportunity for them to register freely.

She explained that, this would enable them use the birth certificate to acquire important national citizens’ documents such as the Ghana Card and passport for their children.

On the other hand, parents, who had their children registered, expressed their sincere gratitude to UNICEF for sponsoring the mop-up free birth registration for them.

Madam Serwaa Bernice, the mother of a four month old baby, said, she was elated to have had her daughter registered finally.

“We the parents of Maame Krobo are grateful to UNICEF and to Births and Deaths Registry for freely registering the births of our children,” she said.

“Thank you UNICEF for putting smiles on our faces. God bless UNICEF,” she added.

Mr Augustine Kunti, a guardian, said the free birth registration exercise was a very good one, adding that, “I feel very happy about it. This is because last year, I had to pay money to get mine done. And so if our children are having it for free, we are most grateful to UNICEF.”

The Births and Deaths Registry in partnership with UNICEF held a week-long free birth-registration campaign, from November 5-9, for children in Kwahu Afram Plains South and North Districts of the Eastern Region.

The exercise, which was under the auspices of UNICEF sought to increase the mobilisation of births within the two Districts.

UNICEF in collaboration with the Births and Deaths Registry would also extend the exercise across all 10 regions of the country.

From November to December, the Births and Deaths Registry with the support of UNICEF, would be reaching communities in 75 districts, which have some of the lowest birth registration rates in the country.

According to UNICEF, currently, more than 30 per cent of children under the age of one in Ghana were not registered.

The objective of the campaign is to make more Ghanaians aware that it is free to register a baby before the age of one; that birth registration is accessible to all, and it is to increase the overall number of children registered in order to reach the planned target of 70 per cent registration in 2018.