Killing of donkeys on the increase in the northern sector – DONYAEPA 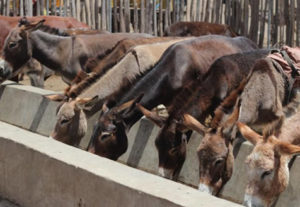 Killing of donkeys is on the rise in the northern parts of the country, a situation, which threatens the livelihoods of owners and the communities at large, the Development and Environmental Protection Organisation (DONYAEPA) has said.

DONYAEPA, a non-governmental organization, has said the killing of donkeys is on the rise because the donkeys’ skin is on high demand in especially China, where it is used to produce a traditional medicine.

Mr Hudu Amadu, Executive Director of DONYAEPA, who addressed a press conference in Tamale on Wednesday, said “we are appealing to the government and other stakeholders to enforce the ban on donkeys’ skin trade to save the lives of the donkeys’ owners and the communities at large.”

Many donkey owners in the northern parts of the country are peasant farmers, who depend largely on their donkeys for livelihood as the donkeys perform vital tasks including helping convey produce from farms to markets.

The government, therefore, has placed a ban on donkeys’ skin trade to salvage the unsustainable loss of donkeys in the country as donkeys cannot be farmed or bred the same way as production of animals because the species is not well suited to this kind of production.

Mr Amadu said due to high demand for the skin of donkeys, “There are agents of the skin trade, who go round and convince owners of donkeys, buy many donkeys, and kill them. Every day, many different groups slaughter the donkeys.”

He said “the number of donkeys slaughtered is alarming and needs to be addressed urgently. The negative effect of the killing of donkeys is forcing young women in the northern parts to migrate to the south for jobs.”

Estimates by the Donkey Sanctuary, United Kingdom (UK) showed that there are 14,000 donkeys in the country whiles over 50,000 donkeys are slaughtered annually- some may come from neighbouring countries.

Mr Amadu said the process of killing the donkeys was not good adding that “the manner in which the waste from the killed donkeys are thrown away is causing unhygienic conditions in the affected communities.”

Mr Alex Mayers, Head of Programmes at The Donkey Sanctuary, UK called on all to join efforts to support affected communities and protect them from the illegal trade.