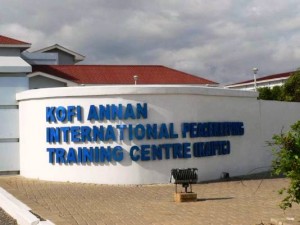 A two-week Protection of Civilians Course (PoC) is underway at the Kofi Annan International Peacekeeping Training Centre (KAIPTC) in Accra.

It is being organised by the KAIPTC in collaboration with the Swiss Government.

The PoC, which is a residential programme, seeks to equip participants with a comprehensive understanding of the causes and nature of armed conflicts in Africa as well as innovative approaches to preventing them.

It is being attended by 30 participants from across the West Africa sub-region and sub-Saharan Africa.

It highlights on topics such as background and history of protection of civilians, overview of contemporary United Nations (UN) and regional economics communities’ peace operations.

Speaking at the opening ceremony, Brigadier General Irvine Nii-Ayitey Aryeetey, Deputy Commandant of KAIPTC, underscored the need to build capacity to engage in the management and resolution of conflicts.

He said the course also aimed at developing a robust pool of trained civilian, police and military personnel who could function in ECOWAS, African Union, and UN field missions, as well as contribute to conflict prevention efforts in various capacities in their respective countries.

Brig. Gen. Nii-Ayitey Aryeetey noted that over the years KAIPTC had established itself as a Centre of Excellence in research and training in the Conflict and Peace Operations Fields, and working in close collaboration with their regional and global partners.

He stated that the Centre was also working assiduously, through the running of courses like this, to contribute significantly to the objectives of the ECOWAS Conflict Prevention Framework and the African Peace and Security Architecture.

The Deputy Commandant said the course was structured as a module-based learning course and its delivery would involve lectures, in-class discussions, case studies, peer teaching, simulation exercises and the like, and of course, some social activities.

He said it was therefore hopeful that the course would significantly enhance their capacity to contribute ultimately towards the building of a peaceful and stable Africa where the security of all our people would be assured.

Mr Gerhard Brugger, the Swiss Ambassador to Ghana, said the protection of civilians had been recognised by all states under the Geneva Conventions, which highlights the respect for humanity, however, the most difficult challenge had been lack of compliance.

The Ambassador therefore, tasked participants to build their capacities to ensure accountability in their respective countries.

In an interview with the Ghana News Agency, Madam Anuarithe Kilibazayire, a participant from Rwanda who works with United Nations Mission in South Sudan (UNMISS), called for a united action to protect civilians.

She said however, there was also a need to prevent conflicts in the first place by focusing on its causes.

She noted that as a peacekeeper my expectation was to improve my knowledge about how to protect civilian as it was part of its mandate at UNMISS and part of the mandate of the UN Peacekeeping mission.

Madam Kilibazayire, who described herself as a victim of genocide, said in 1994 the protection of civilians was there in Rwanda and before joining UNMISS she wanted to know why UN did not protect the civilians at that moment.

“And am sure as part of this course I will get more knowledge and more understanding, as protection of civilians is very important for me,” she added.