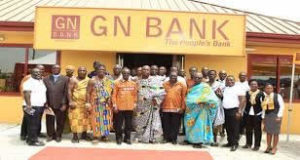 The management of GN Bank has urged customers to remain calm and ignore rumours that sought to suggest that the financial institution was facing liquidity challenges.

It described the news purporting the Bank’s collapse as unfounded and mere speculations targeted at causing fear and panic among its customers in the wake of the current crisis in the banking and finance sector.

Consequently, it has called for the unrivalled support of customers in its quest to provide unparalleled excellence in customer service underpinning the organization’s operations since its inception in 1997.

Mrs Gladys Siga, the Central Regional Manager gave the assurance on the sidelines of a press conference organised by the Edina Traditional Council to dispel the ravaging rumours about the Bank’s collapse.

According to the Council, the owner of the Bank, Dr Papa Kwesi Nduom, is a native of the area, and they have resolve to support his works to create employment for the youth.

Mrs Siga entreated all customers to disregard any malicious anonymous messages urging customers to withdraw their services due to its liquidity challenges.

“Our Bank is never collapsing. We have solid financial liquidity and mobilisation efficiency to sustain operations. Disregard the rumours and join us in providing close to client banking services throughout Ghana with excellent customer service while creating wealth for stakeholder.

“The management of the Bank is working hard to meet all the necessary banking requirements by the Bank of Ghana (BoG) due its prudent financial management models to withstand any challenges,” she said.

Mrs Siga further assured that the Bank will continue to work diligently to maintain its legendary status of being the friendliest bank with unrivalled commitment to introduce more technological services and products to meet the growing needs of its clients in the communities.

In that regard, it has opened more than 300 branches giving it nationwide geographic appeal to underlie its status as the “People’s Bank”.

Addressing a press a conference in Elmina on Tuesday in support of the Bank, Nana Kwodwo Condua VI, Omanhen of Edina Traditional Area, urged his people to keep their accounts with the Bank.

He said the Bank remained the only indigenous private Ghanaian owned commercial bank that originated from the area and needed their support.

The Edina Omanhen indicated that, though some banks had been hit by panic withdrawals that had made it difficult for them to meet their customer demands; the GN Bank was not in crisis.

He ascribed a reason for the crisis in the sector to the inability of most customers to service their loans and urged the public to desist from the defaulting in paying back loans.