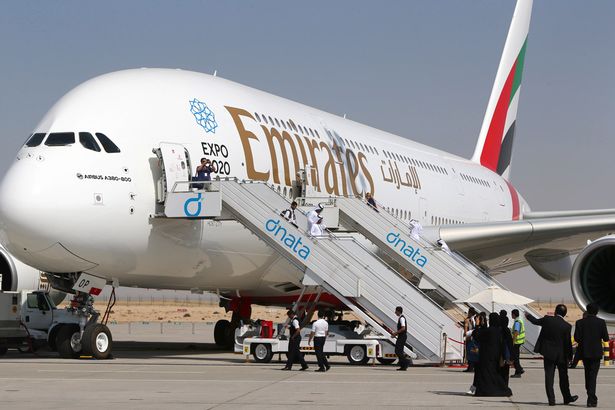 Emirates Airlines’ iconic Airbus A380, bearing the ‘Year of Zayed’ livery landed in Accra, on Tuesday, to commemorate Ghana’s new Terminal 3 and to cement the relations between the nation and the globally acclaimed air line.

The ceremonial flight of the largest passenger aircraft in the world, was also in recognition of Ghana’s drive towards improving aviation infrastructure to allow it to handle aircrafts of all sizes.

Mr Orhan Abbas, the Senior Vice President, Commercial Operations- Africa, for Emirates Airlines, told celebrants at a reception ceremony for the Emirates A380 in Accra, that the one-off flight, was a show of the airlines’ commitment to Ghana, which was an important destination in West Africa for Emirates.

The maiden flight of the aircraft was also to test the capability of the new Terminal and its operations.

“It shows the importance of Ghana to Emirates; for us to bring the A380 to West Africa and to Ghana is milestone by itself,” he said.

“It should show you the commitment we have to Ghana, its aviation sector and to the market”.

He said  Emirates was happy with operations in Ghana over the past 14 years and would soon celebrate the 15th Anniversary.

“The Accra route is doing very well for us and I think looking at Ghana, it will expand further,” he said. “Now that you have this world class facility, you are helping your own market to grow”.

Mr Abbas commended the ‘vision and foresight’ of the Government of Ghana in investing in world class airport facilities , saying it will further open up the country to greater trade and tourism.

He said the A380, with its quiet engines and other attributes, had reinvented air travel, with Emirates’ home and hub in Dubai allowing customers to travel to destinations across six continents, with just one stop.

Emirates currently operates 105 of them. However, only five of them are decked in the ‘Year of Zayed’ livery to mark the centennial anniversary of the birth of the founding father of the United Arab Emirates Sheikh Zayed bin Sultan Al Nahyan.

Mr Abbas said the A380 flight to Ghana was not only a proud moment for Ghana but also for Emirates as it paid tribute with its livery to its founding father and thus spread his legacy of inspiration, dedication and visionary leadership across the globe.

Mr Joseph Kofi Adda, Minister of Aviation, said the A380 flight was an important milestone for Ghana and a demonstration of the advancement of the aviation industry in Africa and Ghana, in particular, and also the need to promote and enhance cooperation and partnership between governments and actors to advance service delivery in the aviation sector.

“This landmark achievement will no doubt further improve our two countries’ bilateral reciprocal economic activities and create job opportunities for the benefit of our youth, which is a major goal of Government,” he said.

Mr John Attafuah, the Managing Director of the Ghana Airports Company Limited, and Mrs Cecilia Dapaah, the immediate past  Aviation Minister, both expressed excitement at the event, noting its historic nature and describing ‘it as a proud moment for Ghana.’

The Emirates A380 has a three-class configuration with 430 economy class seats, 76 Business class seats and 14 First class seats.