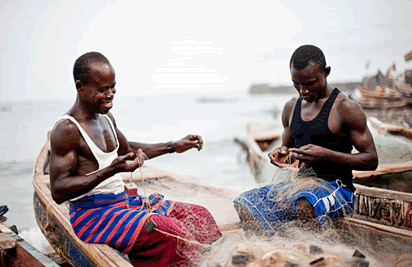 Oyster fisher folk of Tsokomey and Bortianor in the Greater Accra Region have received certificates after the completion of a co-management training held in Accra.

The beneficiaries, numbering 150, were trained for 18 months in areas of Co-Management, Ecology and the Reproductive Cycle of the Oysters as well as their managements.

The initiative was a collaborative effort by Sustainable Fisheries Management Project together with Development Action Association, in partnership with the University of Cape Coast Aquaculture Department.

Mrs Hannah Agyei-Boakye, the Greater Accra Regional Director of Fisheries, Fisheries Commission, at the event on Wednesday, said the sustainability of the resource was very important and urged the fisher folk to protect the resources not just for their livelihoods but also future investment opportunities.

She said training the fisher folk was a challenge due to the scientific nature of the process.

Mrs Agyei-Boakye said they were trained according to the required parameters necessary for the growth of the oysters so they could grow to big sizes and become marketable.

She advised the beneficiaries to use the acquired skills to enhance their businesses and replicate it across other shores.

The Regional Director said self-compliance and volunteerism should be the driving force amongst fisher folk to boost the growth of oysters.

Some of the beneficiaries expressed satisfaction about the training and commended organisers for impacting knowledge to boost the production of oysters.

Ms Bernice Bebli, an oyster harvester, said work was not progressive at first since they did not know some of the effective methods they were thought.

She said through USAID and Sustainable Fisheries Management Project, they had acquired machines such like the reflectometer, which they used to test the salinity of the Densu River, since the oysters did not survive in too high or low salt.

Ms Cecilia Senu, a beneficiary, said data collectors also moved from site to site to check for suitable areas where they could harvest more.

She said the Bojo Beach contains lots of oysters but one problem was the filth at the shore, which hindered the survival of the oysters.

She called on stakeholders to go to their aid to clean the Bojo Beach since it is the main source of their livelihood.