September 26, 2018 Africa/International Comments Off on Hortifresh Programme launched for Ghana and Ivory Coast 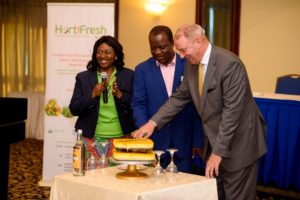 Ghana and Ivory Coast are to experience a boost in their horticultural production and export with the launch of the Hortifresh West Africa Programme.

The Programme, supported by the Embassy of the Kingdom of the Netherlands in Accra, is aimed at establishing a sustainable and internationally competitive fruit and vegetable sector that would contribute to the inclusive economic growth and nutrition security.

Mr Ron Strikker, the Netherlands Ambassador to Ghana at the launch of the programme said, Netherlands was committed to moving from aid to trade.

SNV is implementing the HortiFresh project in a consortium, together with Resilience, Advance Consulting, SENSE and Wageningen University and Research.

The programme will contribute to three identified areas that are in line with Ghana’s development policy.

He said there were opportunities that focused on improving food safety for the domestic market, better quality and added value for export.

He called on the financial sector to prioritise the horticulture sector in their loan portfolio; as the programme has identified many reliable companies with profitable business projects.

The Ambassador said the financial sector was crucial to providing the investment funding for innovations and expansions, adding that “l was shock to find out that out of all the loans that Banks give out in Ghana, only four per cent goes to the agriculture sector.”

He said through the programme, implementers wants to change the figure and engage banks to start lending to the horticulture sector at reasonable conditions.

He said the programme would challenge companies to innovate and expand their businesses; looking at new market opportunities both in the domestic and export markets.

The Ambassador said Netherlands was committed to the growth of the sector in both countries, indicating that “l strongly believe that the horticulture sector, by its very nature, can provide many jobs, exports and economic growth to the country.”

Mr George Oduro, Deputy Minister of Agriculture in charge of Horticulture, commended the Netherlands Embassy in Ghana and implementers of the programme for their continuous support to the fruit and vegetable sector.

He called on the implementers of the programme to expand the support to inputs for vegetable farmers to improve on their yields.

He expressed the hope that the programme would bring some viability into the horticulture sector to engage more youth.

He said government was very much committed to the growth and development of the sector; hence the necessary efforts made in working hard through the support of the various agencies to enable EU lift the ban on vegetable exportation.

He said when the ban was lifted, government would make sure vegetable farmers and regulators made due diligence before the commodities were exported into the EU market.

Mrs Sheila Assibey-Yeboah, the Programmes Manager, Hortifresh, said the programme succeeded the GhanaVeg programme, which was implemented between 2014 and 2017 and supported more than 30 innovative projects implemented by lead companies.

She said the core activities of the new Hortifresh programme would include the support for innovative business ideas of small and medium enterprises and the development of strong horticulture cluster in key tomato, onion and mango production areas.

“Through these activities, the programme wants to reach to at least 15, 000 smallholder farmers by 2012, with a 20 per cent increase in their productivity,” she added.

Mrs Assibey-Yeboah said a Cooperate Agreement was signed between the Fruit master, Rabobank Foundation and Hortifresh programme to develop a 5,000 meter square greenhouse in the Volta Region.

She said in the agreement the three partners committed themselves to the financing and technical support for quality production of tomatoes, bell pepper and cucumbers for the national market, employ at least 25 new staff who would operate the greenhouse and grading facilities.

She said “for Hortifresh and Rabobank Foundation the pilot forms the start of a longer term partnership, through which a number of projects, particularly those with an emphasis on smallholder farmers would be supported.”