September 25, 2018 General News Comments Off on Rebecca Foundation is not a partner of Star Times Corporation – First Lady 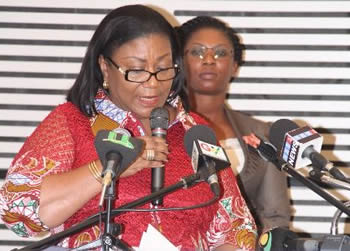 The Office of the First Lady has explained that the Rebecca Foundation “has never been in any time”, partner Star Times Corporation, a Chinese firm operating in Ghana, as is being suggested in parts of the media.

The Office of the First Lady, in a statement issued on Monday, and copied to the Ghana News Agency, refuted the allegation that the Foundation had played a role in the Government’s engagement with Star Times to manage Ghana’s national digital television transmission platform.

The statement said the Rebecca Foundation was set up for purely charitable purposes and that neither the First Lady nor the Foundation had any role to play in any engagement between Star Times and the Government of Ghana, neither directly or indirectly.

The Statement  said the Foundation was, however, very grateful to Star Times for offering football kit to be donated through the Foundation to the SOS Children’s Village, where the First Lady is a patron.

Star Times Corporation’s offer to provide football kits for the children was because of their association with Ghana football, the Statement explained, adding that, “This worthy effort, it must be stated, was not at the instance of the Foundation”.

Giving more background to the football kit offer, the statement explained that in 2017, the First Lady, Mrs Rebecca Akufo-Addo, on a trip to China, signed a Memorandum of Understanding (MOU) between the Rebecca Foundation and the Licang District Experimental School in Qingdao to establish an exchange programme between Ghanaian and Chinese school children.

The programme, which sought to deepen cultural, academic and sports ties between the pupils of the two countries, would see an exchange of 15 pupils each between Ghana and China, annually.

Under the terms of the MOU, Ghanaian pupils would learn martial arts, ping-pong and other disciplines, while Chinese pupils would benefit from football training with their Ghanaian counterparts.

The first group participating this year from Ghana were 15 children from the SOS Children’s Village, who are expected to gain an experience that would make a positive impact on their lives.

It said the Star Times Corporation Football Kit offer support was publicly announced and it was purely for charitable purposes.

The statement said the Rebecca Foundation was committed to improving the welfare and well-being of women and children, especially the vulnerable in society, and works with various partners who “contribute in diverse ways to our vision and mission”.

“We are forever grateful for the continuous support the charity is receiving from its well wishers, both in Ghana and abroad.

“We wish to assure the general public that the Rebecca Foundation will continue to be guided by the strict principles of honesty, integrity and transparency.”