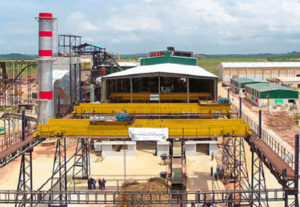 This, he said, would create employment for the unemployed youth in the area.

He noted that proper implementation plan and commercialisation strategy for smooth operation of the factory were not put in place after its inauguration by the previous government.

That explained why it had become difficult, getting the factory functional.

President Akufo-Addo said this when he met with chiefs and people of Komenda and later inspected the place as part of his four-day tour to the Central Region.

“There was no proper plan for the smooth take-off of the factory when we took over the reins of government and that we only met debt and an idle factory.”

Issues regarding the amount of land and the type of sugar were not known” he added.

The Sugar Factory, which has the capacity to crush 1,250 tonnes of sugar cane every day was built at a cost of $35 million with an Indian Exim Bank facility and inaugurated by then President, John Dramani Mahama in May 2016.

Concerns had been raised about the lack of adequate and the right sugar cane for the factory to operate at its maximum capacity since its inauguration.

The factory was expected to generate energy for its production activities and to produce by-products such as molasses for the alcohol industry.

The expectation is that its revival would help to significantly reduce the importation of sugar and create direct and indirect jobs for the people.

President Akufo-Addo said his government remained resolute in its determination to make good the election campaign promises made to Ghanaians – to return the country to the path of economic growth and prosperity.

He repeated his total commitment towards ensuring that every Ghanaian child of school going age had access to free quality education to improve their lives.

Education, he said, was the bedrock of government’s drive to leverage economic resources, to empower the Ghanaian and bring down poverty.

Mr Douglas Mensah, the Managing Director of the Factory, said there were structural and technical issues that needed to be addressed before the factory could function well.

As part of efforts to get more sugarcane to feed the factory, the management was engaging the National Service Scheme in sugarcane plantation.

He appealed to the government to construct a landing bay at Komenda and improvement of roads in the area.