Newspaper vendors going out of business in Accra

September 8, 2018 General News Comments Off on Newspaper vendors going out of business in Accra 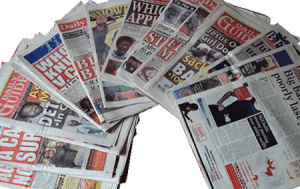 Some newspaper sellers in Accra on Thursday expressed concern about the uploading of news stories on the internet, and other social media platforms, which was affecting patronage of newspapers.

A newspaper vendor told the Ghana News Agency in an interview that apart from the resort to the internet and other social media platform for news, the consistent and in-depth newspaper reviews on both television and radio is killing the business.

Mr Kwame Aboagye, newspaper seller near the Ministries told the GNA that “I have been in this business for over 30 years but now my job is threatened as the internet and newspaper reviews, both on television and radio, is killing our job”.

He said, since the various newspapers publish their stories on internet before they (seller) get their paper for the market, it makes it difficult for people to buy the newspapers.

“We have even told the various print media managers to delay putting their stories on the internet so that people will buy our newspapers”.

Mr. Nii Amoah also a newspaper vendor said, “it is only the elderly people who buy the newspapers because of interest but the youth are interested in social media rather than the newspapers”.

He said the cost of newspapers was also a factor that was not helping their business because some of their clients are facing financial challenges.

Some communication experts are linking the recent staff layoffs of media personnel to the marketing trends and low patronage of the newspapers.

Mr Andrew Danso-Aninkora, President of the Ghana Independent Broadcasters Association (GIBA) has expressed concern about the development on the media front, saying that, the Association will begin talks with labour unions to get to the bottom of the lay-offs in the media.

“We will need to meet and find out and understand what is going on and put out a document,” he said.

Meanwhile, an Economist, Professor Peter Quartey, believes the media houses that are currently challenged were not set up as viable businesses.

According to him, there is a link between the media staff layoffs and the banking sector crisis.

“If the media outlets are not financially sustainable, they draw on these financial institutions to remain vibrant…and certainly once their source of funding dries up, they go down. But if they get a capital from their financier and you are independent and viable, I don’t see why if your financier goes down you should also go down; unless there are no good corporate governance structure in those media houses,” he said.