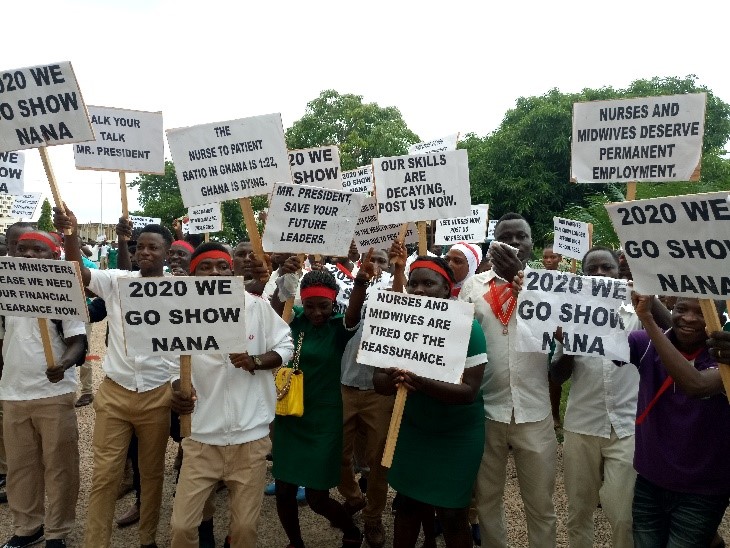 Jobless nurses and midwives in Upper West Region on Wednesday protested against government for not giving clearance to pave way for them to be posted to the public health sector.
The potential health workers who had been bonded therefore demanded the Ministry of Finance grant financial clearance to the Health Ministry to allow them postings to various health facilities.
The members of Ghana Nurses and Midwives Trainees Association (GNMTA) and the National health Students Association marched peacefully to the Upper West Regional Coordinating Council where they submitted a petition to the Regional Minister, Alhaji Sulemana Alhassan, for onward delivery to President Akufo-Addo.
Spokesperson for the associations Mr Saeed Mohammed Awal said nurses and midwives who completed in 2016 and had successfully gone through their mandatory one year national service were still languishing at home, rendering their talents and skills virtually useless.
The Associations gave government three weeks ultimatum to address their plight or  receive another demonstration in the national capital, Accra.
After delivering the petition to the Regional Minister, he noted that the health of Ghanaians was at stake and the country’s quest to attain the sustainable Development Goals (SDGs) and delivering Ghana Beyond Aid were equally at risk.
According to him the current nurse to patient ratio of 1:22 and was far below the standards of World Health Organisation (WHO), saying Ghana had recorded the high numbers of unemployed graduates in the health sector from 2016 till now.
He stated that their records indicated that 7,230 bonded nurses and midwives, 14,254 nurse assistance clinical and nurse assistance as well as 5,380 verified degree and private trained nurses and midwives in addition to 629 diploma bonded nurses and midwives from 2016 to 2017 were yet to be engaged.
He said nursing was a practical and continued process hence the urgent need for the government to clear the way and post them to various health centres.
“It came to us as news and joy when the 2018 first quarter budget was read and 27,000 nurses and midwives were captured to be enrolled permanently,” Mr Awal said.
He said since then nothing concrete was done and called on the President to give the needed attention to their petition and outline measures to solve unemployment menace in the country.
Alhaji Alhassan who received the petition on behalf the President said government was working to get them employed permanently and implored them to exercise patience as unemployed nurses and midwives issue started since 2012 and pledged government’s commitment to address it.
Source: GNA