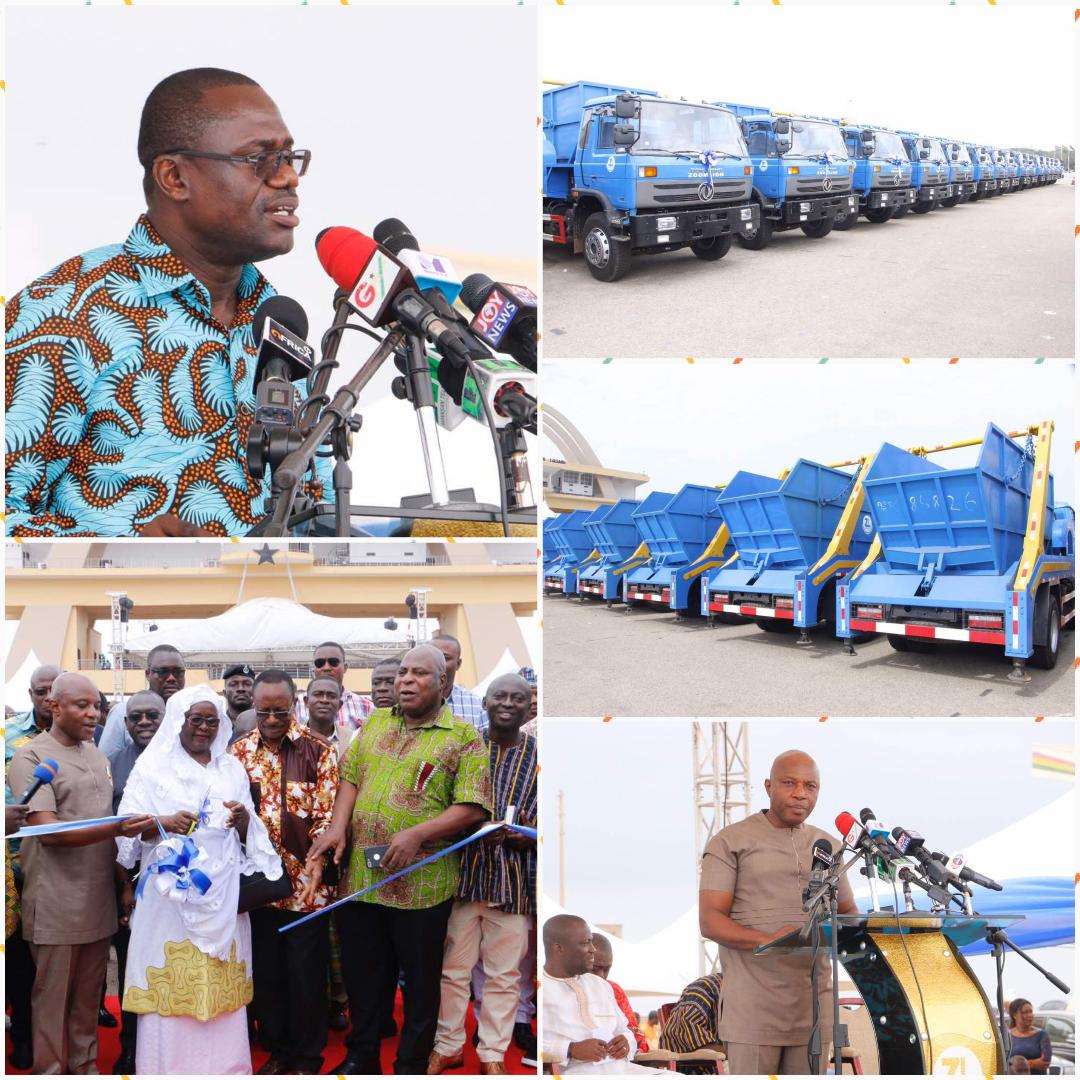 Zoomlion Ghana Limited, has added to its fleet of vehicles some 500 compacting trucks to support its operations in the newly created Municipal and District Assemblies (MMDAs).
The new skip trucks which come with the requisite number of containers for efficient and effective operations are also to help resource the company to execute its contracts to remain the leader in the country’s waste management industry.
Dr Joseph Siaw Agyepong, Chairman of the JOSPONG Group said the distribution and usage of the newly procured vehicles would help in creating 300 direct and about 1,000 indirect jobs in the MMDAs,
He made the announcement during the out-dooring ceremony of 150 of the trucks at the Black Star Square in Accra.
Dr Agyepong said the release of the trucks was part of the company’s expansion strategy to meet the needs of the growing population and rapid urbanisation and said Zoomlion Ghana strategies were evolving with its changing needs, and in that respect required the support and collaboration of all citizens and stakeholders.
According to Dr Agyepong, “Zoomlion Ghana Limited supported President Nana Addo Dankwa Akufo Addo’s vision of making Accra a clean city and to create jobs and promote the private sector which was the engine of growth.
He said the company embarked on a similar exercise in 2016 where some 400 compacting trucks and 5,000 tricycles were procured to ensure prompt collection and disposal of waste in the country.“Zoomlion has plans to soon distribute one million waste bins to households for effective waste collection.
“We think that giving dustbins to each household would go a long way to solving the waste problem. Alongside this, we are digitizing bins by placing Radio Frequency Identification (RFID) stickers on them to be able to ensure that they were lifted daily”.
“The Jospong Group Chairman said the RFID system would allow the company to know where bins were located so that those collecting the rubbish could easily identify or locate the bins. This innovation is in line with the government’s digitisation efforts”.
“Our teams are working in partnership with the School of Nuclear and Allied Sciences to find culturally acceptable solutions for waste to energy systems,” he added.
Mr Michael Yaw Gyato, a Deputy Minister of Sanitation and Water Resources said players in the sanitation industry needed to up their strategies if the unalloyed vision of President Akufo-Addo to make Ghana the cleanest country in Africa was to succeed, adding that, the industry needed innovation to convert waste to energy and manure and recycling of plastic waste and bottles.
He said, Ghana’s population was estimated at 27 million and that each citizen generated 0.5 tonnes of waste per day, “meaning 13,500 tonnes of waste were generated nationwide daily and only 60 per cent of their waste were collected living the 40 per cent uncollected.”
He said the statistics pointed a gloomy picture and task was hurricane and that there was enough space for the most people in the private sector to play a role.“The ministry therefore invites more people to venture into sanitation, ‘a stature like Zoomlion’ to assist in changing the poor sanitation narrative of the country”.
Mr Yaw Gyato said the Ministry would soon roll out policy initiatives which would include; MMDAs sanitation league table on quarterly basis to indicate the cleanest MMDAs and will also guide policy evaluation in the country.
“The Ministry in the coming days will come out with a clear road map on how to deal with the sanitation situation in the country and emphasised that sanitation is a civic responsibility of every citizen who must take steps to maintain good sanitation practices”.
Hajia Alima Mahama, Minister for Local Government and Rural Development advised the beneficiary MMDAs to ensure the proper use and good maintenance of the new trucks and expressed the willingness of her Ministry to partner stakeholders in the sanitation industry to ensure the realisation of President Akufo-Addo’s vision.
Mr Ishmael Ashitey, Greater Accra Regional Minister said the distribution of the trucks to the Assemblies was a great relief to people charged with the responsibility of managing waste in the various regions.
Meanwhile, Zoomlion is in the process of introducing mobile compacting equipment to be stationed within specific communities for easy disposal and treatment of waste.
The equipment is to help ease the pressure on existing transfer stations, most of which have exhausted the allowable space, therefore, posing danger to some players in the management cycle.
Source: GNA.