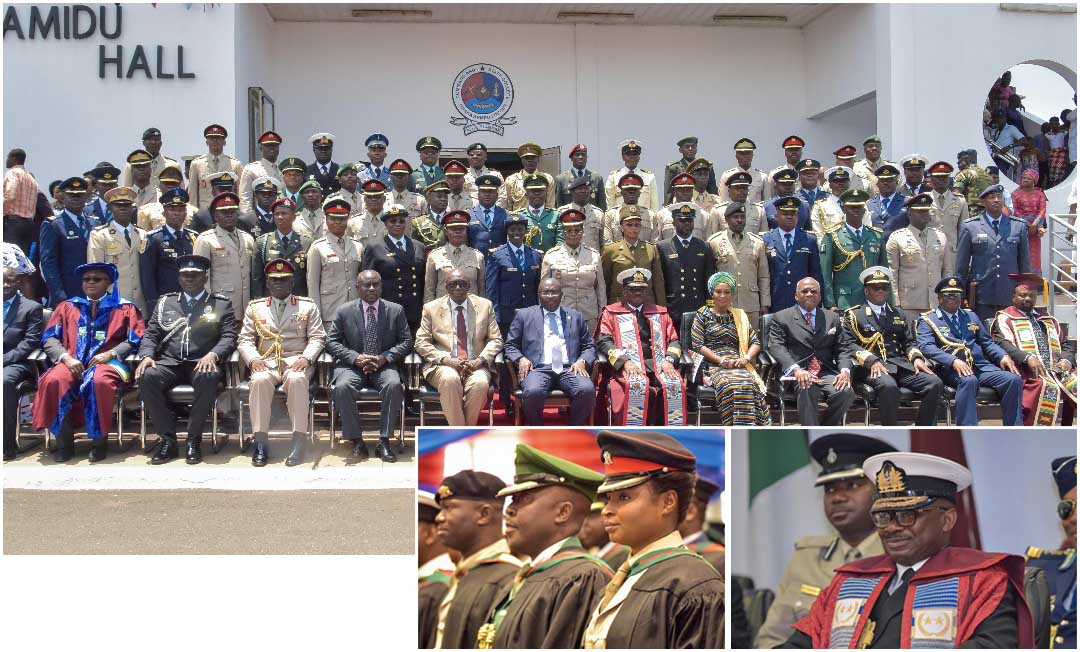 The Vice President, Dr Mahamudu Bawumia, on Thursday urged graduates of the Ghana Armed Forces Command and Staff College to transform their knowledge and experiences into national life for accelerated national development.
He reiterated government’s commitment to support the College with the necessary financial and logistics to ensure it retained its status as one of the learning centres of excellence on the African Continent.
He expressed optimism that the course had enhanced linkages among the security services of the sister African countries, which would enable them to respond swiftly to the contemporary defence and security issues and ensure peace and harmony on the African continent.
“The acquaintances and networks generated here in the Ghana Armed Forces Command and Staff College are fundamental in engaging your course mates on matters of national and international strategic significance.
“Trust me, maintaining and sustaining these cordial relationships at both the personal and professional levels will largely enhance your career accomplishments, “the Vice President emphasised.
Vice President Bawumia, who is also the Chairman of the Armed Forces Council, made the remarks at the 2018 Joint Graduation Ceremony of Senior Division Course 39 and Master of Science in Defence and International Politics programme at the Ghana Armed Forces Command and Staff College in Accra.
Other dignitaries that graced the occasion included; Mr Dominic Nitiwul, Minister of Defence, Lieutenant General Obed Boamah Akwa, Chief of the Defence Staff, Major General WA Ayamdo, Chief of the Army Staff, Mr David Asante-Apeatu, Inspector General of Police, Rear Admiral Peter Kofi Faidoo, Chief of the Naval Staff, Members of Parliament, parents and the loved ones of the graduands.
In all, 59 students graduated with 20 of them coming from nine sister African countries, including Nigeria, Togo, La Cote d’Ivoire, Burkina Faso, South Africa, Tanzania, Equatorial Guinean, Zambia and Sierra Leone.
There were officers and staff from some state agencies and departments as well as allied security services such as the Ghana Revenue Authority, Ghana Cocoa Board, Ghana Ports and Harbour Authority, Ghana Immigration Service, Ghana Police Service, Stanbic Bank and Vodafone.
The course, aimed at forging greater understanding and working relations between the Ghana Armed Forces and regional armed forces, promotes students’ understanding for co-operation between the military and civilian populace, as well as enhance their ability to understand international issues for critical analysis and improve general understanding.
The Vice President observed that the College had a unique system of upholding regional and international connections at different levels, adding that, the presence of students from other African countries was a clear manifestation of these international linkages.
He acknowledged the niche the College had carved for itself over the years, as a centre of excellence in Africa for training middle and senior level officers for command, staff and leadership roles in their various armed forces and allied security institutions.
“I am reliably informed that the vacancies for the next course (Course 40) have about 30 officers from 14 African countries. That is a remarkable feat and I commend the Commandant and his staff for the good job they are doing,” he said.
He noted that the 2018 Combined Joint African Exercise with observers from sister Command and Staff Colleges of some member states of the Southern Africa Development Community was a healthy development that would enable security services of the African countries to share ideas and experiences with other regional blocs, in order to synchronise interoperability in the face of numerous conflicts on the continent.
The exercise was sponsored by the German Government in collaboration with the Kofi Annan International Peace Centre.
Vice President Bawumia commended the German Government for supporting the exercise and believed the course had imbued in them essential qualities that would enable them to shoulder higher responsibilities and surpass challenges in line of duty.
He urged the various Ministries, Departments and Agencies, as well as the district assemblies to support the College to pursue its agenda of training high quality middle and senior staff of the nation for accelerated national development.
Those who excelled in the course were rewarded with certificates, trophies and shields, with Major Ibrahim Ali of the Ghana Armed Forces emerging as the Overall Best Student.
Source: GNA