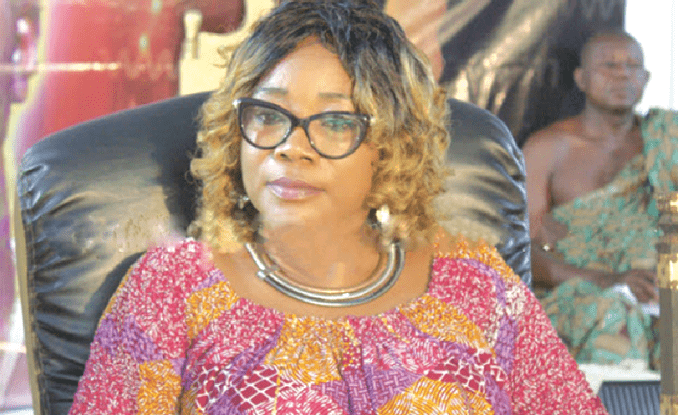 Mrs Morrison was last week named as the Minister designate for Gender, Children and social Protection.

The Paramount Chief made the commendation when he addressed a durbar of Chiefs and People of Agona Nyakrom, to climax the Annual Akwambo festival at Nyakrom.

Okofo Katakyi Nyakoh Eku said the Chiefs and people of Agona West are most grateful to the President for the honour done to the MP and pledged their unflinching supports to the President and to help him succeed in his policies and programmes.

The Omanhene said the people of Agona West are strongly behind the government, under President Akufo-Addo, adding that, the people would never forget the kind gesture done to the MP and the entire population in the area.

He expressed the hope that the MP would discharge her duties diligently to enhance the wellbeing of the people, especially children’s welfare.

The Omanhene said the chiefs and people of Agona Nyakrom have initiated self-help projects, which include a mortuary at the Health center, as well as its expansion to provide quality health care delivery.

He said the essence of the festival was to raise funds for the commencement of the project, adding that, the designs for the projects are ready and appealed to corporate bodies and others to come to their aid.

The Omanhene expressed concern about the behaviour of the youth, who are taking Tramadol and other hard drugs, which poses a danger to their lives.

Mrs Cynthia Morrison, Minister designate for Gender, Children and Social Protection and MP for Agona West, thanked the chiefs at Nyakrom for their prayers and support, which had inspired President Akufo-Addo to offer her the position.

She said plans are far advanced to construct a recreational Centre for the aged in the Agona West Constituency.

The MP said the budgetary allocation has been prepared for the construction of Vocational Centre for Agona West to enable the girls in the area to learn a trade.

The MP donated 50 bags of cement and GH¢5,000.00 towards the construction of the mortuary at THE Nyakron Health centre.

Mr Kwamena Duncan, Central Regional Minister, assured the people all promises made by the NPP government would be fulfilled.

The Minister commended the chiefs of Nyakrom for the bold decision to initiate projects and assured them of supports for its early completion.