Government asked to ban sale of river banks to developers

August 6, 2018 General News Comments Off on Government asked to ban sale of river banks to developers 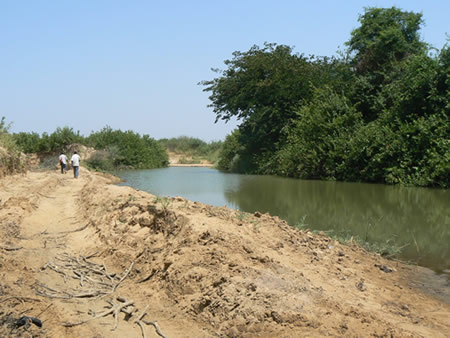 He said it had become necessary to improve access to fresh water bodies for irrigated farming and other agricultural purposes.

Mr Quansah made the call during his turn at the Assembly’s Town Hall Meeting at Sogakope.

He described as worrying and dangerous, the manner in which such lands were being sold out and acquired for infrastructural developments, blocking access to water bodies for irrigated farming, fishing and for domestic use.

“State institutions and Assemblies must wake up to invoke an existing Environmental Protection Agency (EPA) Law demanding that such acquisitions must at least be 50 meters away from water bodies”, Mr. Quansah later told the GNA in an interview.

He said for example, the situation was dire at Sogakope and outlying areas where developers sited buildings right to the river body in chains, blocking the lake to other users in the area.

Mr Quansah said with dry season irrigated farming becoming the only clear hope for the country’s food needs, such sales needed to be checked quickly across the country, and appealed to chiefs to reconsider such ventures.

He said 3,000 cashew seedlings had been nursed and ready for planting by willing famers for free under the Planting for Food and Jobs project, and that sugarcane, soya beans and rice were also being considered for mass scale production in the area.

Mr Quansah said there were high prospects for cashew producers at West Africa’s first Cashew Nut factory at Prampram near Tema, which needed raw material sources to run and urged young people to take advantage of the programme.

Mr. Luis Agamah, District Chief Executive (DCE) of the area said the Assembly had so far settled GH¢2.5 million debt and contract sums left by the past regime and that two Community based Health Planning Services compounds at Agbugbla and Gonu were connected to national grid.

He said a Police post at Asidowhui and a three-unit school block at Kua had also been completed for commissioning and said over 40 projects in education and health infrastructure and water extension were currently being.

Mr. Agamah said the Assembly decided to complete all major projects left uncompleted before starting new ones to ensure value for money.

The DCE assured that the Asidowhui-Agave, Sokladzi, Galosota and Lavey roads would also be fixed soon.

The people, including chiefs lauded the Assembly and called for community libraries, proper physical planning in the area, and the need for quick and timely information on agricultural inputs from government.