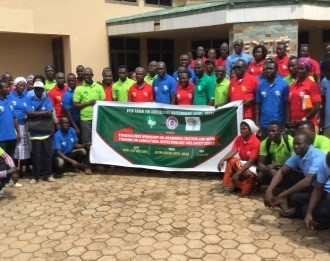 Professor Kenneth Danso, Director of Biotechnology and Nuclear Agricultural Research Institute has said Genetically Modified Organisms (GMOs) will stand the test of time and enhance agricultural development in Ghana should they be fully adopted.
Professor Danso said this during a sensitisation workshop organised by Open Forum for Agricultural Biotechnology (OFAB) Ghana, for stakeholders in Agriculture in the Upper East Region on Genetically Modified Organism (GMOs), Biotechnology and safety issues.
The aim was to rekindle awareness using scientific basic genetics to explain the making of GMOs to increase farmers understanding of how sound it was to adopt the technology.
Professor Danso explained that the technology was not new, so far as cell formation was concerned, since it was the same as it was in humans.
In a presentation on how GMO seeds were made, he outlined challenges traditional crops faced over the years and how climate change, poor rainfall and crop diseases had impacted on crop yields.
He said these factors called for modification of crop varieties using modern technologies that had become necessary, and noted that biotechnology was one of the best tools in plant breeding, adding that, the use of the method could be used to engineer crops to withstand pests and diseases as well as harsh climatic conditions.
Responding to farmers concerns on the technology, the Director assured farmers that intensive research was conducted in collaboration with research institutions such as the Savannah Agricultural Research Institute (SARI), and the Council for Scientific and Industrial Research (CSIR) among others.
Even though he indicated that there was no release of GMOs in Ghana, he stressed that crops from such technologies were taken through rigorous assessment before they are released for.
He noted that currently, such releases were only done in confined field trials conducted by SARI and CSIR and other research institutions.
With the assurance of works done by these research institutions, he indicated that Ghana was ready and capable going GMOs. However, according to him, the onus depended on perceptions of the general public and also purely driven by the needs of farmers.
In an interview with the Ghana News Agency on the sideline of the workshop, the Prof Danso noted that there  was no  public application for release of GMOs on large scale for planting, and added that, challenges in the adoption of the technology was due to earlier misconceptions about the technology, hence, the difficulty in releasing them out to farmers.
Citing advantages of the technology, the Director said most arable lands currently in the country were being used for buildings by private developers and indicated that not much consideration had been given to the increasing population, and added that, poor rainfall patterns and climate change had impacted on food security.
He said as a country that sought to attain the Sustainable Development Goals on food security, biotechnology was one of the best tools to manage food insecurity because it guaranteed healthy crops, pest resistant, and higher yields among others that could improve on the economic benefits for farmers.
Mr Daniel Osei-Ofosu, Research scientist who took participants through some laws and conventions in Ghana  in the development and commercialisation of GMOs said the conventions included the Rio Convention on Biological Diversity adopted in 1992, the passage of Bio safety laws in 2011, among others and assured the participants of the safety in going GMO.
Mr John Atia, a farmer from Apam Yine Farms in Balungu said his fears had been allayed about importation of the GMO seeds and added that fears about monopoly and access to seeds were the initial concerns.
Mr Atia pledged his support for biotechnology and the fact that seeds would be produced in Ghana for farmers and noted that it would help farmers to produce more.
In attendance were members of the peasant farmers Associations, and personnel from the Ministry of Food and Agriculture (MoFA).
Source: GNA