Eric Ayiah signs a five-year contract for AS Monaco

August 3, 2018 Sports Comments Off on Eric Ayiah signs a five-year contract for AS Monaco 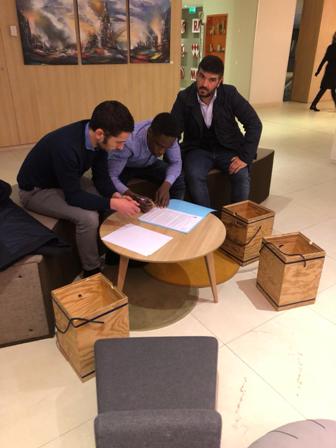 Former Black Starlets and Charity Star FC, Eric Ayiah has penned down a five-year deal with French giants AS Monaco after successful medicals with the French side.
The young prolific striker, who was bent on joining a club, that would harness his talent had to settle for the French club AS Monaco after weighing so many options from other European top sides, according to the Chief Executive Officer of Charity Stars FC, Pastor Samuel Owusu Amoah.
Pastor Amoah noted in an interview with GNA Sports that, as part of the measures by the Gentile Revival Ministry International Church to give hope to young talents, Charity Stars Football Club was formed to unearth and harness talents.
“It has always been the top most priority of a club that was formed on the principle of raising and nurturing talents, Ayiah like most of our boys had to wait for the best opportunity with a club that can help and groom young talents than money.
“The former U-17 captain has signed a five-year contract with AS Monaco after a successful medicals and he is currently with team for their pre-season,” he said.
According to him, Ayiah, who has been registered for the coming season was full of life and delighted to have waited for such a golden opportunity to show and exhibit his talent with a big club like the former Ligue one champions.
Pastor Amoah further noted that Emmanuel Boateng, who is also a product of Charity Stars FC is a testament of the club’s values of blending multiple talents, with his new single track “Oluwa Dey”, enjoying massive airplay in Ghana and beyond.
Ayiah, who led the Black Starlets to the Federation of International Football Association (FIFA) U-17 in India in 2017 was linked to top European clubs like FC Porto.
Source: GNA