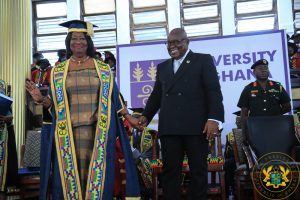 The University of Ghana, has sworn-in Mrs Mary Chinery-Hesse, as its first female Chancellor at a ceremony in Accra.

She succeeds Mr Kofi Annan, the Former UN Secretary-General, who retired this July after serving two terms, from 2008 to 2018 as the Chancellor.

She would preside over all functions and activities of the University, and confer on qualified persons all degrees, diplomas and certificates awarded by the university.

Mrs Mary Chinery-Hesse, was robbed at an investiture and swearing -in ceremony on Wednesday, led by President Nana Addo Dankwa Akufo-Addo, to swear the Oath of Office and Secrecy respectively.

In 1991, she became the first female product of the Institution to be awarded an honorary degree by the University of Ghana, and also served as Member of the University Council from 2006 to 2009.

Prof. Owusu said Mrs. Chinery-Hesse, has had distinguished careers both in Ghana’s Civil Service and at the United Nations, and several other international Institutions, including the International Labour Organisations (ILO).

She had also received several prestigious awards and decorations, including the Order of the Star of Ghana in 2006, and the Gusi Peace Prize for International Diplomacy and Humanitarianism in 2010, and was a Friend of the African Union Panel of the Wise.

Mrs Chinery-Hesse, he said, also became the Chief Advisor to the Former President John Agyekum Kufuor from May 2006 to January 2009, the Commissioner of the Public Utilities Regulatory Commission from 2003 to 2006, and the Vice-Chairman of the National Development Planning Commission, from 2001 to 2009.

Other offices held included a Member of the National Council for Higher Education, from 1974 to1980, the First African Female Resident Coordinator of the United Nations System, from 1981 to 1989, and again, the First Female Deputy Director-General of the ILO.

She also served as Chairperson of the UN’s Consultative Committee on Programme and Operational Questions for several years, and was as well the Chairperson of the Commonwealth Expert Group of Eminent Persons on Structural Adjustment and Women, which produced the landmark Report, “Engendering Adjustment”, he said.

The Vice-Chancellor said Mrs Chinery-Hesse currently chaired various Boards, including the Goodwill Ambassadors of the Kofi Annan International Peace Keeping Training Centre, the Board of the Centre for Regional Integration in Africa and the Zenith Bank.