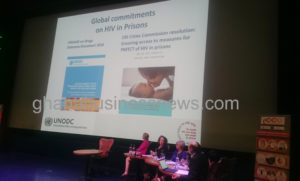 People who are in prison around the world face greater risk of contracting HIV because of several factors including lack of adequate resources for health in prison, unavailability of enough condoms and general prison conditions, Dr. Ehab Salah of the United Nations Office on Drugs and Crime has said.

Dr, Ehab who was making a presentation at a pre-conference event held Sunday July 22, 2018 by the organization, Accountability International at the margins of the International AIDS Conference in Amsterdam, The Netherlands said the 10.35 million people in prisons around the world face greater risk of contracting HIV, due to the fact that they are isolated from the public health system and have low access to health services among others.

“People in prison are five times more likely to be infected with HIV, tuberculosis and hepatitis B,” he said.

According to Dr. Ehab, the HIV prevalence rate in West and Central Africa is 8.2 per cent.

He also indicated that women and girls serving prison terms and make up about 5 to 10 per cent of the prison population have higher prevalence than men. He therefore called on governments around the world to find alternatives to criminalization.

The regions where prisoners are most affected by HIV are East and Southern Africa and West and Central Africa, both of which have a high HIV prevalence in the general population, and Eastern Europe and Central Asia and Western Europe, reflecting the over-representation of people who inject drugs in prison—a group with a high prevalence of HIV, a report in The Lancet in 2016 says.

It is reported that prisoners also face higher risks of HIV transmission with drug use and needle sharing, tattooing with homemade and unsterile equipment, high-risk sex and rape commonplace.

The pre-conference event looked at how some countries convict individuals for ‘intentional infection’ of others through sex and called for decriminalization, which in some cases is based on the viral load.

The 22nd International AIDS Conference under the theme; “Breaking Barriers, Building Bridges”, is seeking to draw attention to the need of rights-based approaches to more effectively reach key populations, including in Eastern Europe and Central Asia and the North-African/Middle Eastern regions where epidemics are growing.

Some 15,000 delegates are expected in the Dutch capital for the conference starting on Monday July 23, 2018.

By Emmanuel K. Dogbevi, in Amsterdam, The Netherlands
Copyright ©2018 by Creative Imaginations Publicity
All rights reserved. This report or any portion thereof may not be reproduced or used in any manner whatsoever without the express written permission of the publisher except for the use of brief quotations in reviews.